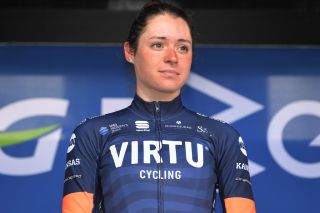 Movistar Team Women announced Monday that legal constraints permit Sofia Bertizzolo from competing with the Spanish outfit in 2020. The 22-year-old Italian had signed a two-year contract with Movistar, however, her existing contract with the Italy's national Polizia di Stato legally prevent her from holding two full-time jobs.

Movistar, registered in Spain, has applied to be a top-tier Women's WorldTeam next year and so is obligated to pay their riders a minimum annual salary of €15,000 (employed) or €24,600 (self employed).

Movistar sign Guarischi and Eric to women's roster in 2020

Merino, Teruel and Biannic stay with Movistar in 2020

"The regulations regarding UCI Women's WorldTour teams, a category the Movistar Team is aiming for in 2020 through a WWT license, prevent the existence of dual work contracts, which in practice keeps Bertizzolo from starting her contract with the Blues on January 1st," read the statement from Movistar.

"After exploring every option available, and establishing that it is impossible to properly combine both situations, the Movistar Team can only wish Sofia the best with her future sporting endeavours."

Although riders are not permitted to work for any other team or advertise for any other sponsors than those belonging to the Women's WorldTeam, Cyclingnews understands that there is no direct rule issued by the UCI that prohibits riders contracted for Women's WorldTeams from having a secondary source of income.

Bertizzolo would either have to give up her government contract in order to sign with a Women's WorldTeam or instead compete with a second-tier UCI Continental team that is not obliged to offer riders a base salary.

Bertizzolo has taken to social media to confirm her situation saying that Italian law prevents a female cyclist from signing professional contracts. She stated that while there are exceptions to this rule in Italy, such self-employed contract adjustments would not be legal in accordance with Spanish employment laws.

Hello, just want to made this post to clarify the situatuon is regarding myself, because I think news comes out not so clear. If we want to talk about law we need to be precise and remmember that each country have his own rules. My situatuon involve uci reform for WWT - italian law - and spanish law. Being part of the Police cycling team in Italy -that support me since 2015 - but more, being a FEMALE ITALIAN CYCLIST (not allowed to be professional for law - per i giornalisti italiani legge 81/1991) I need a specific UCI contract. This contract, that I need to be lagally ok in Italy, is not legal in Spain. To be clear I cannot be part of a Spanish team next year Every country have its law and it is very difficult to understand how it works, that's why we just figure it out now. Sofia Bertizzolo

Movistar announced in August that Bertizzolo had signed a two-year contract that would see her competing with the team through 2021. She currently races for Team Virtu Cycling, but was left without a team for next season when Bjarne Riis announced he would shut down the women's programme at the end of the year.

Movistar manager Sebastián Unzué had said that she was a priority signing for the team and that she would have been given opportunities to progress her talents in the classics finals and in the sport's biggest stage races.

Bertizzolo, 21, finished the season ranked third in the Women's WorldTour youth classification. This season she was fourth at the Tour of Flanders, second on the opening stage at Emakumeen Bira, and took top-10 stage finishes at the OVO Energy Women's Tour and Giro Rosa.