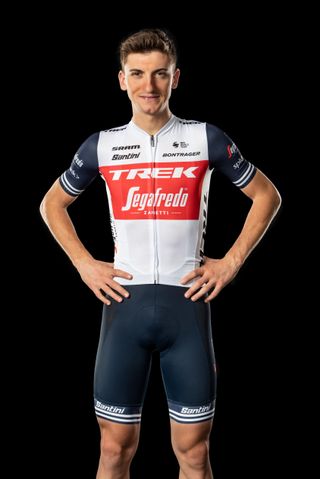 Trek-Segafredo have revealed their men's and women's 2020 team kits at the Rouleur Classic in London on Thursday. Lizzie Deignan and Giulio Ciccone presented the jerseys that were designed by team sponsor Santini.

The men's team colours will do away with the primarily-red jersey that the riders wore this year and instead more closely resemble the white jersey used at the Tour de France. The main front and back torso panel is white with a large red block section across the chest to display title sponsors Trek and Segafredo.

The main difference is that the sleeves on the jersey are now black with two white stripes on the cuffs.

There are 17 riders confirmed on the Trek-Segafredo men's team roster next year with ten new names that include Vincenzo Nibali and his brother Antonio, along with Kenny Elissonde, Alexander Kamp, Emīls Liepiņš, Michel Ries, Charlie Quarterman and Quinn Simmons. Junior time trial world champion Antonio Tiberi will join the team in 2021 after a season as an under-23 rider.

Under new UCI rules, men's WorldTour team are obliged to have a minimum of between 28-30 riders.

The Trek-Segafredo women's jersey is similar to this year's version, keeping its blue hues. A panel across the top torso that showcase the title sponsors is dark blue. The bottom section is a criss-cross of various shades of blue from light to dark. The jersey keeps the white sleeves with dark blue stripes on the cuffs. The collar is now dark blue instead of white.

Cyclingnews will have interviews with Deignan and Ciccone directly from the Rouleur Classic.