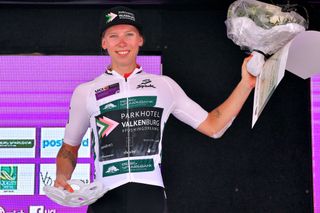 Lorena Wiebes problems extricating herself from the Parkhotel Valkenburg team have ratcheted up a notch, with the Dutch squad bringing the case to court accusing Wiebes of breach of contract.

The case is due to be submitted to the court in Alkmaar on Thursday, according to 1limburg.nl.

Wiebes, the Dutch champion and the leader of the UCI World Ranking, has had offers from several other larger teams and hoped to come to an agreement with Parkhotel Valkenburg by January 1.

The 20-year-old told Nos.nl last week that she was considering not racing at all until the transfer window opens on June 1, 2020.

"So there are two options for me: either not [race] for half a year or still transferring to another team," Wiebes said.

"So there is a good chance that I will no longer cycle because I no longer want to ride for Parkhotel. It has now taken so long that I have moved on."

According to NOS.nl, even if Wiebes can get out of her contract with Parkhotel Valkenburg, she would not be eligible to race with any other teams before the transfer window because the contract deadline was November 1, 2019.

"The UCI confirms that it was in contact with representatives of the rider (Wiebes, ed.) In the last weeks of 2019," the UCI said to NOS.

"The rider has been informed that the points she has earned are included in the team's UCI team classification, for which she was registered as a rider on 15 January on the basis of a valid contract.

"The rider has also been informed of the relevant deadlines for registration with UCI Women's WorldTeams and Continental teams, 1 November and 31 December respectively."

Wiebes joined Parkhotel Valkenburg in 2018 and she is reportedly contracted with the team through the end of 2021.

She had an outstanding 2019 season with 15 wins, which have included all three stages and the overall classification at the Tour of Chongming Island, the RideLondon Classique, two stages at the Boels Ladies Tour and the Dutch road race championships.

According to the cycling website Wielerverhaal.com in November, Wiebes had offers for the 2020 season from three of the world's biggest teams; CCC-Liv, Sunweb and Trek-Segafredo, and was looking for a way out of her contract with Parkhotel Valkenburg.