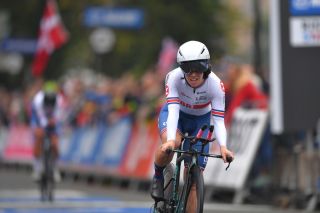 Henderson has ridden for British domestic squad Brother UK-Tifosi p/b OnForm since 2017, but since August of this year has been riding as a stagiaire with US team Tibco-SVB.

Besides her national titles this season – which included second place in the elite women's event en route to her U23 road race title – the 20-year-old former skier was part of the elite British team that took the bronze medal in the mixed relay team time trial at the 2019 UCI Road World Championships in Yorkshire, in the UK, last month.

"I'm looking forward to joining Team Sunweb next year, and taking another step up in my career," Henderson said. "The team has a very professional environment, with various experts, and they are known for their good pathway to develop riders.

"I'm excited to get started in the Women's WorldTour and learn from the other strong and experienced riders on the team," she said.

"Anna is a new kid on the block in women's cycling after taking up the sport late in 2016, having formerly been a junior slalom champion skier in Great Britain," added Team Sunweb coach Hans Timmermans.

"She's still young, and has showed her potential several times at UCI level this season, highlighting herself as a Classics-style rider with a strong sprint.

"Anna visited our Keep Challenging Center earlier in the year, and she impressed us with her qualities," he continued. "We're looking forward to working with her next year and helping her to continue to improve."