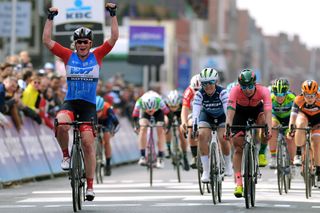 WNT-Rotor Pro Cycling announced on Friday that Ceratizit Group will replace Rotor as the co-title sponsor of the team in 2020. Ceratizit is the parent company of WNT and the two sponsors will provide the financial backing of the newly named Ceratizit-WNT Pro Cycling team as it heads into its fifth season competing in women's professional cycling.

"CERATIZIT Group and WNT joining together as title sponsors brings the family orientated businesses alongside our professional cycling team, with the values of the two companies and the team going hand in hand. We are looking forward to another successful season in 2020," said Managing Director of Cutting Tools Europe, Claude Sun in a team press release.

Ceratizit, who are pioneers of the cutting tool industry, is a carbide producer, a global player in innovative carbide solutions, manufacturing hard material products and high-quality cutting tools.

Based in Mamer, Luxembourg, the company has been a sponsor of the team for the last couple of years, and are currently the world’s fourth largest producer of hard metals.

WNT has been the title sponsor of the team since 2016, with Rotor Bike Components taking on a co-title sponsorship role in 2018. Ceratizit Group have produced Rotor components such as the 2 INpower power meter, Q-Rings, and REVOLVR hubs. Rotor will continue to support the team in 2020.