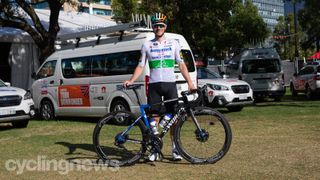 Sam Bennett shows off all his kit at the Tour Down Under 2020 (Image credit: Colin Levitch)

To kick-off a new series on Cyclingnews we caught up with Irish sprinter Sam Bennett to take a look at all of his race kit for 2020.

After recently joining Deceuninck-QuickStep from Bora-Hansgrohe, Sam Bennett will be hoping to kick the season off with a win in Sunday's Schwalbe Classic criterium, ahead of his first WorldTour outing in new colours at the Tour Down Under.

While his bike brand remains the same as last year, with both teams furnished with Specialized's fleet, Bennett's new team sees a host of new sponsors supplying his clothing and accessories.

Bora-Hansgrohe & QuickStep to use alloy bikes at Schwalbe Classic Criterium

Specialized Tour Down Under Collection spotted in the wild

While we've already reported that he'll be tackling Sunday's crit aboard the Specialized Allez Sprint aluminium bike, Bennett has his entire fleet of road bikes with him here in Adelaide.

The Irish sprinter is pictured here with his S-Works Tarmac, Specialized's best lightweight bike, he also has the S-Works Venge aero bike on-site. We're merely a Roubaix away from a Specialized road bikes royal flush.

Like Bennett's former team, Deceuninck-QuickStep also use helmets from Specialized. Ahead of today's recon ride in the Australian sun, Bennett has opted for the S-Works Prevail II helmet, but for race days, we expect Bennett will take the speed gains offered by Specialized's Evade II aero helmet.

The Deceuninck-QuickStep riders' Specialized helmets are treated to the full suite of safety features. The MIPS SL liner helps to offer greater breathability without sacrificing the multi-directional impact protection that comes with the slip liner. There's also the ANGi crash-detection sensor mounted onto the head cradle of the retention system.

A change in eyewear sponsor sees Bennett's opting for Oakley Radar EV Path with the Prizm Sapphire lens for today's recon ride. He's also been spotted wearing Oakley Jawbreakers this week, but whatever his choice, it's arms over straps every time.

Bennett's new Deceuninck QuickStep kit is provided by Vermarc. This, their PR.R jersey, is a lightweight short-sleeve summer jersey.

A custom colourway honours Bennett's win in the Irish road championships, with a green horizontal band across the stomach. Sponsors cover the chest, with the two title-sponsors, Deceuninck Windows and QuickStep Floors, being given the most real-estate.

The same two brands are given prominence on the team's Vermarc P.R bib shorts too, with the hem of the shorts sporting more Irish stripes for the Irish champ.

With footwear being second only to saddles when it comes to personal preference, sometimes even the best cycling shoes don't fit your feet, and when you're being paid to wear them, it can be a difficult problem to overcome. While some riders are forced to sweat it out in overshoes all season, Bennett has been treated to a custom version of the S-Works 7 shoes. Differences include an in-built stretch panel on the outside of the fifth metatarsal, and the tongue is replaced with a softer-edged version.

Deceuninck-Quickstep have recently announced a two-year partnership with Wahoo, so most riders are still figuring out their new GPS cycling computers. Bennett, however, is a well-established 'Wahooligan', having used Wahoo head units for a number of years at his former team.