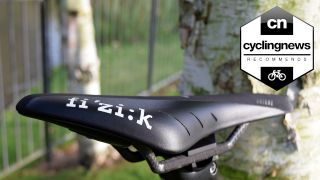 No two people are built the same, and no one saddle will work for every person. The best road bike saddles will mesh well with your rear end, put your weight on the sit-bones, and relieve pressure on soft tissue areas. A poor saddle can ruin a day out on the bike, and even cause injuries and imbalances down the road, so it's important to choose the best.

There are thousands of saddles on the market, which can make finding the right one for you and ongoing process, but thankfully Cyclingnews is here to help.

Scroll down for our pick of the best saddles, however, if you're unsure what to look for, we've got you covered on that too.

Jump to: What to look for in a saddle?

Traditional Fizik shape has a huge number of fans

With a flat top and a decent width in the nose, the Arione is a saddle common among racers. Measuring 300mm in length, it is one of the longest saddles out there, though there is a decent amount of material at the back that extends well beyond the seating area. It also features generous padding throughout the entire length of the shell.

According to Fizik's Spine Concept fitting system, the brand says the Arione is ideal for 'Snakes', or highly flexible riders, which in our experience is more or less on-the-money. The Arione R3 comes in a range of colours to match any bike, features a nylon shell, and the wings have a bit of flex built in to better adapt to what your legs are doing.

An odd shape that's backed up by plenty of science

Double nosed saddles have long been popular with time trialists and triathletes because the two arms at the front provide comfortable support for your sit bones when in a forward position, but road cyclists have slowly been jumping on the double-nosed bandwagon. ISM claims its design doesn't restrict circulation or cause undue soft tissue pressure by removing substantial parts of the saddle itself, so the saddle only comes in contact with your sits bones.

Previously known as the Breakaway, the Performance Narrow (PN) range is said to have better thigh and hamstring clearance measuring 110mm at its widest point, though the first time you take it for a spin you'll likely notice the extra width in the nose. The front arms feature a downward slope, said to help you roll your hips forward, ISM saddles do take a bit of time to dial in, but once you do this perhaps-odd-looking seat will make for many hours of comfortable riding.

Funny looking, but don't knock it 'til you've tried it

Selle SMP has been making saddles for almost a century, and though their saddles may look a bit like medieval torture devices, the long and wide centre cutout that runs the full length of the shell and sharply bent nose have gained passionate following the world over, especially from bike fitters.

Selle SMP's unique design is based on empirical studies looking into ergonomics, eliminating soft tissue pressure and maximising genital blood flow, and if you can get past the odd aesthetic offers a supremely comfortable seat. The Well features a pretty dramatic curve, which is designed to keep you planted on the saddle but also allows you to rotate your pelvis to suit your riding position. It also features generous elastomer padding and features SMP's one piece steel rail.

Price
Padding may not offer enough support for some

With a rounded profile, the Scratch features a pressure-relieving channel, although there's not actually a hole, which Prologo calls PAS or ‘Perennial Area System’. ‘Active Density foam' or multi-density foam is used throughout and offers support in the areas that need it, while still having enough give to take some of the sting out of square edges.

With a rounded profile, the brand says the Scratch is a good choice for those who may struggle to touch their toes. Prologo has an extensive range of saddles, and the Scratch is available in quite a few versions, ranging from the one here to a full carbon shell with the CPC grippers.

Designed in collaboration with the Canyon-SRAM Women's team, Ergon created the initial design looking at the difference in male and female pelvises, also taking into account that women are usually more flexible than men.

With a broad flat nose, the Ergon SR features a spacious cutout that continues most of the way up to the nose which is designed to relieve soft tissue pressure. It's relatively short in length and flat through the shell kicks up in the tail, this particular version features generous gel padding inserts that run the length of the sitting area.

A large cut out that increases blood flow to reduce numbness

Selle Italia makes the SLR flow in men's and women's specific designs, both featuring oversized cutouts running the majority of the length of the saddle. The Women's version features silicone inserts around the channel to prevent the ‘hard edge’ a common gripe of other saddles with similar designs.

The SLR lady flow measures 275mm long, and is 4mm wider than the men's version; the shape is quite different and with a 135mm max-width, it's designed for those who have narrower sit bones and ride in an aggressive position. There is minimal padding throughout, and the shell is pretty stiff to compensate for the size of the central channel.

A short nose saddle that works for both men and women

In the past few years, we have seen quite a few short-nosed wide saddles with a massive cutout gain popularity, and one of the most widely used is the Specialized Power. Designed initially as a Women's saddle, the Power works well for both sexes, and the snub nose is ideal for those who maintain an aggressive position on the bike.

Specialized offer the Power in several trims including a full carbon fibre S-Works version, an Elaston version with a bit of extra padding, and a Women's specific Mimic version which features a TPU ‘hammock’ over the centre channel to offer additional soft tissue support.

Futuristic looking saddle that does more than just look good

Hailing from Italy, Astute is relatively new to the saddle game, but these new kids on the block are no slouches.

At first glance, Astute saddles look heavily padded, however, the brand uses varying density memory foam over the length of the shell; firm at the back getting softer as you move towards the nose. The Starlite is surprisingly firm when you first sit down and provides excellent support, but as you move forward the softer padding is much appreciated. There is a wide pressure-relieving channel through the middle with a small cutout and the shell features a bit of built-in flex and a waved profile from front to back.

Some find the edge of cutout to be hard

With a wide channel and moderate padding, the Montrose has a wide pressure relief channel covering about two-thirds of the length and a decent kick up in the tail. Designed with what Bontrager calls inForm Biodynamics, Trek says the Montrose is aimed at maximising your natural on-the-bike movement, not only making for a comfortable perch, but also not restricting the rider's range of motion.

The saddle features long rails allowing for plenty of fore and aft adjustment, it measures 270mm in length and is available in three sizes. Bontrager has also added abrasion-resistant polymer panels on the back edges of the cover to prevent scuffs and tears which can wear out the user's shorts.

Broad nose soft nose combine with broad rear
Plush padding throughout
Like the Power, not a whole lot of room to move about

Shimano's answer to the short and wide saddle with a large cutout is the PRO Stealth, ideal for those who are ever searching for a low and aero position on their bike.

Available in two widths, aesthetically the Stealth looks quite similar to the Power; however, the profile is flatter front to back, with a broader nose and slightly softer padding. While the Stealth was initially designed with Team Giant Alpecin as a TT perch, we’ve had pretty good luck with it on our mountain bikes.

What to look for in a saddle?

Finding a saddle that fits starts with making sure the seat is supporting your body weight with your sits bones (ischial tuberosities and pubic rami) and not the surrounding soft tissues. This means finding a saddle that is the correct width and shape.

Most bike shops will have a memory foam pad which you can sit on to measure the width of your sit bones. If your local shop doesn't have one of these tools, the same process can be done at home with a piece of cardboard. Once you have this measurement it gives you a rough starting point for what size saddle you are going to need, but several factors including your flexibility and how aggressive your position on the bike is will also play a significant role.

As a rule of thumb, riders who tend to stay in a more upright position or are highly flexible tend to prefer flat (front to back) saddles. A flat saddle also makes for a more consistent feel when sliding forward or back on the saddle.

On the other hand, waved or curved saddles are usually preferred by riders who are less flexible or ride in a long and low, aggressive position. Riders who don't move around much on the saddle also usually prefer a wavy or curved profile as it keeps them locked in place.

Many brands are offering gender-specific saddles and have been putting more resources into developing saddles to suit different anatomies. Having said that, we know plenty of women who prefer a men's or 'unisex' saddle, and even a couple of men whose saddle of choice is a women's specific model.

Many road saddles feature cutouts or pressure relief channels. The idea here is to eliminate soft tissue pressure by removing the material that would push on the wrong part of your undercarriage.

For some, the cutout is the golden ticket; however, others may find the edge of the channel digs into or pinches sensitive areas.

When it comes to padding, less is usually more. Highly padded saddles can cause more soft tissue pressure than their lightly padded counterparts because your sit bones are sinking into the saddle, not being supported by it. On the other end of the spectrum, saddles with no padding at all like the Prologo C.ONE Nack Carbon Saddle are usually overkill unless you ride exclusively on smooth tarmac.

Saddles come in a range of prices because of the variety of materials used for the shell, cover, and rails.

Rail material will also play a role in the design of your prospective saddle but also the price. Carbon rails are the lightest, but they may not work with your seat post clamp because of their oval shape. Titanium rails are a tad lighter and more expensive than those with steel, but steel rails are the most durable.

Most saddles on the market will have a cover made with synthetic leather, some have reinforced areas or even grippy patches to keep you from sliding around.

Finally, if you get a new saddle, make sure to check your saddle height, different models can add or subtract a few millimetres and introduce a whole new set of issues.

It's worth mentioning again that we are speaking in broad terms here, and what works for you will depend entirely on you and your anatomy.