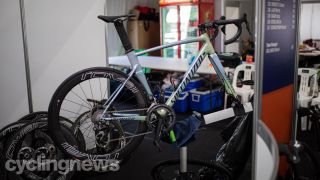 A special edition of the Specialized Allez Sprint Disc at the Tour Down Under (Image credit: Colin Levitch)

Each year, Specialized brings us a range of special edition kit just in time for the Tour Down Under. This year, the collection from Oz is inspired by the Australian Budgie, a colourful long-tailed parrot which is one of the many local species affected by the ongoing bushfire crisis.

Along with the announcement of this collection, Specialized has also pledged to donate $100,000 USD to the WIRES Australian Wildlife Rescue Organization, which is working tirelessly to rescue and rehabilitate animals affected by the fires.

This year’s Tour Down Under collection includes special editions of the Evade and Prevail helmets, S-Works 7 shoes, socks, a cap, and an Allez Sprint Disc, which will be used by Deceuninck-QuickStep and Bora-Hansgrohe in the Schwalbe Classic Criterium on January 19.

We spotted Bora-Hansgrohe rider Ide Schelling’s new Allez Sprint Disc being worked on by one of the team mechanics in the TDU Race Village.

Introducing the 2020 Down Under collection inspired by the colorful Budgie. As this noble bird, and much of Australia's wildlife, suffers from devastating bushfires, @iamspecialized are donating $100,000 to WIRES to support relief efforts.More about this- https://t.co/aEeCaxFb2H pic.twitter.com/YkmnKMGK59January 15, 2020