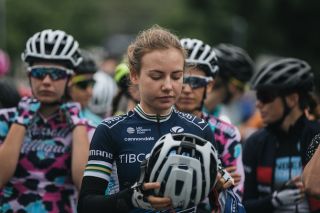 Sarah Gigante (TIBCO-Silicon Valley Bank) won the third and final stage, and the overall ranking, of the Virtual Tour of the Gila on Sunday. She finished on the final climb solo ahead of teammate Lauren Stephens, with Andrea Ramírez Fregoso (Agolico BMC) in third.

The final race was just over 70km and one for the climbers and with roughly 20km to go there were only 15 riders left in the front group. Emily Newsome (Tibco-SVB) picked up the intermediate sprint just before the field hit the final climb of the race.

Stephens started the day in the overall read leader's jersey, and sat comfortably in the small pack as they started climbing. Attacks started inside of 10km to go.

Gigante continued on solo in the closing kilometres as the group behind dwindled to just Ramirez and Stephens, and she finished both the stage victory and the overall title.