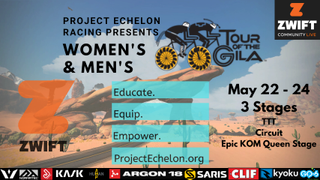 Eder Frayre (L39ION of LA) thought he had won the third and final race of the three-day Virtual Tour of the Gila on Sunday, however, race announcers confirmed that he was later disqualified because he did not finish the previous day's stage 2.

Frayre crossed the stage 3 finish line first ahead of Chris McGlinchey (Vitus Pro Cycling P/B Brother) and Jordan Cheyne (Elevate-Webiplex Pro Cycling). McGlinchey then moved up one spot in the final standings to take the stage win and Cheyne ended up in second place.

The men raced just over 70km on a mountainous final day of racing. Cheyne was alone in the final few hundred metres of the last climb but was caught and passed by Frayre and McGlinchey right at the line.