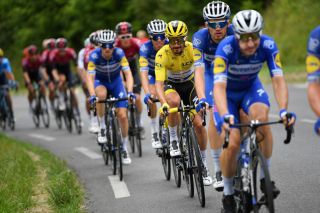 It's no surprise that Deceuninck-QuickStep will be building around Julian Alaphilippe at the Tour de France, after the Frenchman's surprising ride to fifth overall and two weeks in the yellow jersey at last year's race.

Sprinter Sam Bennett will make his return to the race, too, as the Belgian team mount a multi-pronged challenge in the September race. As for who will surround the two big stars, there are plenty of names in contention on the long-list of 15 riders the Belgian team revealed exclusively to Cyclingnews.

Here we analyze who could be in the final line-up for the start in Nice on August 29, and evaluates their chances and roles in the race.

Tour pedigree: It's hard to imagine the 28-year-old bettering a performance from twelve months ago that included two stages wins, a long spell in the maillot jaune and fifth overall in Paris but such are the expectations placed on the Frenchman's shoulders that anything below his lofty 2019 standards will be seen as a step back.

That said, the route has several stages that suit Alaphilippe's style of racing, with plenty of points at which he could ambush the more established GC riders, and if he can replicate his form from twelve months ago then he stands an excellent chance of at least setting French hearts racing once more.

There is, of course, an argument that Alaphilippe only gained so much time in the Tour early on last year because the GC riders never saw him as a threat until it was too late but that underplays just how good he was, with his aggressive ride to Épernay, the Pau time trial and his exploits in the Pyrenees, all underlying his undoubted quality.

Tour pedigree: The 31-year-old Kiwi will return to the Tour de France for just the second time in his career after making his debut back in 2016 but if selected his primary role will be to support Bennett in the sprints.

Bar a short 16-month hiatus at Aqua Blue and EvoPro, the pair have raced together consistently since 2015 and it's clear that Bennett favours Archbold's style and technique when it comes to setting up the sprinters. Michael Mørkøv will be utilized in the leadouts too, but it's Archbold who will start as the primary leadout man in Bennett's train. A highly likely pick at this stage.

Tour pedigree: Finally, after playing understudy and then being left at home for the last few years, Sam Bennett is rewarded with the chance to ride the Tour as a squad's main sprint threat.

The 29-year-old started his tenure at Deceuninck-QuickStep with a win at the Tour Down Under as he looked to fill the sprinting void left by the departing Elia Viviani.

The UAE Tour and Paris-Nice failed to see the Irishman build on his win tally but the Tour de France offers several opportunities, and with arguably the best leadout in the race, Bennett has never had a better chance of completing his set of victories in Grand Tours.

Tour pedigree: The British rider is on the Tour long list but his primary target remains the Giro d'Italia and it's hard to imagine Deceuninck-QuickStep altering their plans at this stage.

That said, an extra pair of legs in the mountains would potentially help Alaphilippe, but Knox has had the Giro pencilled in all season and his 11th place in last year's Vuelta a Espana provides evidence that he's ready to have another tilt at riding for himself in a Grand Tour.

There's no chance of him racing two three-week races at this point in his career so unless the team has a massive change of heart or several riders fail to hit form ahead of late August we don't expect to see the 24-year-old at the Tour.

Tour pedigree: The Belgian has made the Tour de France team for the last two editions of the Grand Boucle and after celebrating a new contract he's a definite for a hat-trick of Tour rides.

The 29-year-old, who recently extended his contract to 2022, will have a domestique role in the race, providing cover on the flats and support during the intermediate stages. He'll also use the three weeks to hone his form for the Spring Classics, while having chances to infiltrate breaks on certain days.

Tour pedigree: It's a contract year for the Luxembourg rider and at 27 this is a pivotal moment for the 2018 Liège-Bastogne-Liège winner.

In theory, he has all the tools to succeed in the post-lockdown race season, where race formats will switch regularly and different skillsets will be required from one week to the next.

Jungels' return to racing includes Strade Bianche, Milan-Torino, Milan-San Remo, and the Criterium du Dauphiné, but his role at the Tour de France will be to support Alaphilippe in the mountains, then work for Bennett when it comes to setting up the team's sprint train.

The sole time trial isn't ideally suited to his characteristics but he may be allowed to chase breaks on certain stages.

Jungels hasn't been at his very best since the spring of last year, so a string of results are imperative if he wants a contract his talents deserve.

Tour pedigree: The Belgian is a recognized climber with valuable Grand Tour experience, but early indications suggest that Serry will head to the Giro d'Italia, rather than the Tour de France. That shouldn't come as a huge surprise given the fact that he's never raced the Tour and that his 10 Grand Tour starts have been split equally between the Giro and the Vuelta.

Not bringing the 31-year-old to the Tour would be further indication of how the team will use the French Grand Tour to prep their cobbled Classics riders for later in the season, while also assuming that Alaphilippe can take of himself in the mountains.

Tour pedigree: Štybar is another rider with plenty of Grand Tour experience with stage wins in the Tour and the Vuelta to his name. The 34-year-old will perform multiple numbers of tasks at the Tour, from chasing breaks, setting up sprints, splitting the field in potential crosswinds and trying to infiltrate attacks during intermediate stages.

Once again though, the Tour will be used to prepare for the Classics but no one should assume that a rider of Štybar's calibre will just soft-pedal through France for three weeks. There's no certainty that any of the races in will take place either pre or post Tour de France, and with everyday counting more than ever riders like Štybar will race on the front foot from the word go.

Tour pedigree: The veteran Dane will make the Tour de France team, of that there's little doubt. He has an arsenal of experience to call upon and it will all be vital as Bennett's leadout man.

He can also swap roles with Archbold depending on the circumstances of the finale and the route, while there's also a role for him when it comes to protecting Alaphilippe.

Tour pedigree: The Dane is one of the team's biggest threats when it comes to breaks, finishing second behind Matteo Trentin on the road to Gap during last year's Tour and taking a solo win at Kuurne-Brussel-Kuurne this season.

With no flat time trial or TTT to aim for, Asgreen will be used to help Alaphilippe on the flat and intermediate stages and it could be those terrains on which the Frenchman launches the main assault on his GC rivals.

Instead, Jakobsen will head to the Giro Italia unless Bennett suffers an injury or dramatic loss of form.

Tour pedigree: The 37-year-old has been spared Grand Tour duties in recent years with his last three-week outing coming at the 2017 Giro d'Italia. However, with so many races condensed into such a short period every rider with experience will be expected to suit up and pitch in.

At this stage, Keisse is set to ride the Giro d'Italia, but he could just as easily perform at the Tour as he chases down breaks and sits on the front of the peloton for hours on end.

Tour pedigree: The Belgian is one of the most valuable domestiques in the WorldTour but his Grand Tour experience is relatively limited given his age. That's down to the fact that the first half of his career was spent in the Pro Continental ranks but he's stepped up since joining Lefevere's team and is often vital in the Classics success.

Whether he makes the Tour de France team is unclear. The team will be reluctant to chase down every break on their own and some riders could collectively cover Declercq's workload if they are pooled together. However, the Belgian offers such a huge comfort blanket when it comes to riding on the front that he might be deemed too valuable to leave at home.

Tour pedigree: The Frenchman has two Tours to his name but neither came in the colours of Deceuninck-QuickStep.

That run is likely to extend into 2020, unless Bennett has problems and the team feel that altering Jakobsen's current schedule is too disruptive.

Sénéchal is fast and he could play a major role in the Classics later this year but his Tour chances are likely to be put on hold for the time being.

Tour pedigree: The 37-year-old, who won the Cadel Evans Great Ocean Road Race in January, is a better Grand Tour rider than many people give him credit for. He's a dependable climber with nine finishes from ten Grand Tour starts.

If selected – and he's provisionally down on the eight-man roster – then the Belgian will occupy the Deceuninck-QuickStep engine room for the full three weeks. He'll do all the work that TV cameras often don't capture, but his role will be vital all the same.