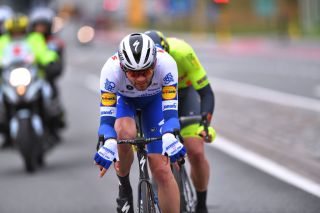 Just under a year ago, Kasper Asgreen had to pinch himself that he was riding the cobbled Classics for the strongest cobbled Classics team in the world. He had, after all, only joined Deceuninck-QuickStep 12 months prior, handed a first professional contract in a mid-season move as Patrick Lefevere looked to plug the holes in his injury-ravaged squad.

After a fine victory at Kuurne-Brussel-Kuurne on the Opening Weekend of the Classics campaign, the Dane now looks like one of Lefevere's leading lights for the spring to come.

"This is very important. Since I turned professional, I've been aiming to become a good classics rider. I took some important steps last year but the next step was taking a win in one of the big Classics, and it came here in the Opening Weekend," Asgreen said in his winner's press conference in Kuurne.

The 25-year-old is not hanging around. Last year, he pushed for inclusion in QuickStep's team for their biggest race of the spring, the Tour of Flanders, and while he might have been told to 'dream on'  at the start of the year, by the time he'd put in a series of impressive domestique performances from E3 to Dwars, his case could hardly be ignored.

The 2019 Ronde saw Asgreen seize his opportunity with both hands and turn it into his major breakthrough. After opening the taps from range – principally in the interests of the team leaders – he endured longer than anyone expected and ended up on the podium in Oudenaarde.

"I'm a bit more protected now than I was last year. Last year, I was pulling from the beginning and I was always one of the first riders to be used, but I was also doing my first season in the Classics," Asgreen said.

"Now I've proved that I can be there, I can save a bit more energy early in the race and that will benefit me later in the race."

That said, Asgreen was keen to emphasise that it wasn't just Flanders that elevated his status, pointing out his performances in the rest of the season, which included a stage win and third overall at the Tour of California, the Danish time trial title, a stage at the Deutschland Tour, and top-fives in the Tour de Suisse time trials.

"I think in general my whole season last year was a lot more consistent in my shape and the results that I delivered. That changed my position in the team a lot. If you just take the 2nd place in the Tour of Flanders isolated, and I didn't perform the rest of the year, I don't think much would have changed."

Asgreen's rise helps to fill the gap left by Philippe Gilbert, although he refused to see the five-time Monument winner's departure to Lotto Soudal as a window of opportunity.

"Gilbert leaving makes it harder," he said assertively, "because now he's a rival instead of a teammate, and now I have to beat him instead of riding with him."

Asgreen will now head towards the main cobbled Classics period in late March as one of a typically crowded plentiful of QuickStep options.

Yves Lampaert, second at Saturday's Omloop Het Nieuwsblad, will be high in the pecking order, as will Zdenek Stybar and Bob Jungels, who won the Opening Weekend's races last year but were quieter this time around. On top of that, Julian Alaphilippe will be coming in to make his Flanders debut.

"I don't think it will change [my position in the team] much. We had a plan and I was already one of the protected riders that had to jump.

"The strength in our team is that we have several riders that can do this. That will not change if you win or lose. If you have the legs, you are protected, if you don't, you have to help. If I go down at some point during the Classics, I will also be a helper instead. That's how it is."

Asgreen has made a lot of steps in a very short space of time, Going some way to explaining the speed of his ascent so far, Asgreen hadn't even left the Kuurne press room when he'd started thinking about the next one.

"The next step is doing it again," he said. "Being consistent every time we race, being up there – that's the next step."