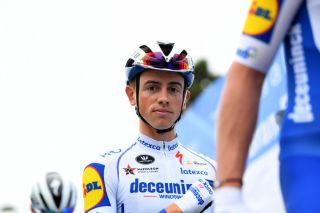 Deceuninck-QuickStep climber James Knox is set for a return to the Giro d'Italia this year, racing alongside 20-year-old Remco Evenepoel as the Belgian makes his Grand Tour debut.

Knox, 24, will restart his season on August 5 at the Tour de Pologne, where he finished tenth last year in a race overshadowed by the death of Bjorg Lambrecht.

The Briton made his breakthrough at the Vuelta a España a year ago, where he rode to 11th overall at the Spanish GrandTour, taking fourth place on the Alto de la Cubilla summit finish. He is currently at the Deceuninck-QuickStep training camp in the Dolomites, preparing for a return to racing next month.

"This sort of camp for me as a climber really serves a purpose," he said in a team press release. "Not only do I get to train in the high mountains, which is an area that I would like to succeed in, but also staying at altitude I believe really helps me.

James Knox: I never felt I had what it took to be a professional

"And then there is also the team environment here, which is not quite like a race, but as a team you push each other on, and we train harder than we would as individuals.

"Lockdown wasn't easy, not having any races since early Spring wasn't easy, so joining the Wolfpack for this 18-day training camp in Val di Fassa has been a welcome change. There has been a great atmosphere here and everyone is desperate to get back to racing as soon as possible, so it's been a really productive get-together."

Knox said that the training camp, which has run from July 6 to 23, is the final step towards getting ready to race again. Poland will be the first time the 24-year-old has raced since February, where he took part in the UAE Tour before the race was cut short by a COVID-19 outbreak among the entourage.

"I still have a bit of time until my first race, but this is the final piece of the puzzle as far as a big block of training and from here on in I will just be fine-tuning to make sure that I am ready to race when I start in the Tour de Pologne," Knox said.

"It will be my second participation there, after last year's edition, when I cracked the top 10 overall. I had a great time there and from Poland I went on to having an amazing Vuelta a España.

"Of course, things will be different now, but on the other hand, nothing has changed in that I am in eager to get back racing and will hopefully have good legs, be it riding for myself or helping the guys out."

While Knox and Evenepoel will be joined by sprinter Fabio Jakobsen at the Giro, the Belgian squad will be sending Julian Alaphilippe and Sam Bennett to the Tour de France.

Deceuninck-QuickStep will return to racing at the Vuelta a Burgos next Tuesday, with Evenepoel, Bennett, Yves Lampaert, Michael Mørkøv, Andrea Bagioli, João Almeida and Shane Archbold on the start list.