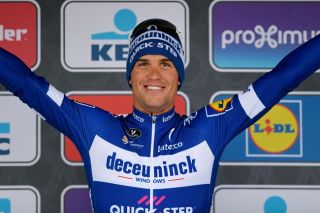 One year ago today, Zdenek Stybar won the E3 BinckBank Classic, showing his cobbled Classics talents yet again and giving Deceuninck-QuickStep yet another important victory. A few weeks earlier he had also won Omloop Het Nieuwsblad, becoming the first non-Belgian rider in more than three decades to win both races.

Instead of being in the saddle, defending his E3 BinckBank Classic title, Stybar is training alone outdoors, presumably in Belgium where he has a home, and trying to stay focused after the coronavirus Covid-19 pandemic lead to the cancellation of his whole spring Classics campaign.

"To be without races it’s harder than I thought. Physically, not so much, but mentally it’s not easy," he said via the Deceuninck-QuickStep team, understanding that the impact of the Covid-19 pandemic is far more important that any bike races.

Stybar: I waited a long time to win a Classic

"I was really looking forward to these weeks on the cobbles, and right now I should have been on the top of my game, but nothing is left now and all I can do is try to adapt to that. Of course, I continue to train, although I don’t put 200km rides anymore, but training without any goals is very difficult and frustrating.

"At the same time, this gives you a whole new perspective and you understand it’s not about cycling anymore. It’s about the real life and there were so many people who got hit harder by what’s happening now, and it makes you think about them and how the whole world struggles. You understand that it goes beyond sports and how important it is in this kind of moments to help each other stay strong and overcome these tough times, be it with a small gesture or a kind word, which at the end of the day can mean the world to them and make the difference."

Stybar is in his 10th year Deceuninck-QuickStep. He has become one of the cornerstones of the team, sacrificing his chances for other riders but then taking victories whenever he can. Stybar won three cyclo-cross world titles and has ridden 22 major Classics since switching full time to road racing. He finished second in both the 2015 and 2017 editions of Paris-Roubaix. He won Strade Bianche in 2015 and a stage at the Tour de France in the same year.

Stybar was poised to again be a protagonist in the spring Classics after enjoying a strong start to the season at the Vuelta a San Juan in Argentina, where he won a stage with his trademark powerful attack.

"My winter was very good, I got that early win in Argentina, I was hungry to race and obtain good results, and in Paris-Nice I felt that my condition was good and on an upward trajectory. That made me super confident that Flanders and Roubaix would find me in one of the best shapes of my life. Now, sadly, it’s all gone and all that we can do is keep the hope things will return to normal soon," he said.

Looking back a year

Stybar used his late attack skills to win Omloop Het Nieuwsblad and tried it again at last year's E3 BinckBank Classic. He was chased down by Alberto Bettiol (EF Pro Cycling), Wout van Aert (Jumbo-Visma) and Greg van Avermaet (CCC Team) but was still strong for the sprint and had the speed to win the sprint.

"It’s unbelievable how fast time flies. Now that I think of it, it feels like it was yesterday," he said looking back a year.

"What I can say is that it was one of my nicest victories, because E3 – besides being a hard event – is one of the most important and beautiful races on the calendar, one which I had always dreamed of winning.

"Everything fell into place that day. After doing Strade Bianche, Tirreno-Adriatico and Milano-San Remo, I knew I had good legs, but you also need some luck, which this time was on my side, as everything went smoothly.

"Our team came into the race with a plan and we executed it perfectly. Before the Stationberg, I told Bob to just attack if he felt strong, and his move was an important one, as it allowed me to just follow the other riders. Of course, they didn’t give it to me for free, as they tried to put me in the wind, but I felt very good and could respond to their manoeuvres. When we caught Bob with just a couple of kilometers to go, he still dug deep and worked for me, and his help was instrumental in the victory I got. I will never forget this and I hope that one day I will repay him for that.

Stybar has been adopted by the Belgian cycling fans but he beat the best Belgians last spring to take a rare Omloop Het Nieuwsblad and E3 BinckBank Classic double.

"It’s an honour to achieve something like this in these revered Belgian races and it makes me quite proud. Now when there’s no more racing, I appreciate it even more. Who knows, maybe one day I will become the first rider to win Omloop Het Nieuwsblad and Ronde van Vlaanderen in the same year, that would be something!"