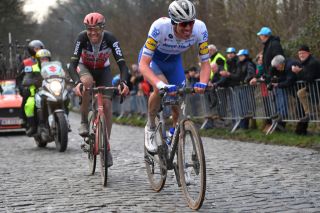 Tim Declercq has voiced his pride at being voted the best domestique in the world by his fellow riders, saying that, for a pure workhorse such as him, such recognition from his colleagues is the "highest achievable accolade".

The Deceuninck-QuickStep rider topped the polling when Cyclingnews asked WorldTour pros to name the best helper in the peloton as part of our 'Domestique Week' of features.

Despite losing out in our reader poll, won by Mitchelton-Scott's Mikel Nieve, the 31-year-old was picked by 17 per cent of the riders who took part in our survey.

Nieve voted Best Domestique in the World by Cyclingnews readers

"It’s great to win both ways, but this comes from the bunch itself. That it comes from your colleagues is a big, big honour," he said.

"For a rider like me, this sort of thing is the highest achievable accolade in my career. I’m really happy, and honoured. It’s also good to have some good news in a bad period."

The rider survey turned out to be a two-horse race between Declercq and Team Ineos' Luke Rowe, who earned just shy of 16 per cent of the vote.

"Luke deserved it, too. I voted for him," Declercq revealed. "He’s someone who, in the Grand Tours, is incredible at his job, and everyone knows that. It’s a real big honour for me to have beaten him, even if it was only by a narrow margin."

Since joining Deceuninck-QuickStep, Declercq has established himself as a tireless and consistent worker in a team that specialises in Classics and bunch sprints. While the team’s leading lights come to the fore later in the race, any success is usually underpinned by the early efforts of the likes of Declercq.

"You see those guys doing the dirty work, but I think we need those people," Deceuninck-QuickStep boss Patrick Lefevere told Cyclingnews. "It’s all about appreciation. Tim’s a smart guy and smart guys often realise what they are able to do and what they aren’t."

When we interviewed Declercq earlier in the week, he recounted how he’d contacted Lefevere and agreed to swap a semi-leadership role at Topsport for a job pulling pelotons in the WorldTour.

"Nobody was interested in Tim," Lefevere said. "When he was a student, he came to my office for an interview and he said, 'It’s my big dream to one day race in your team.' I said, 'Never give up.'

"When he signed for us, I told him, 'You can be a good domestique for the first 200km, but I don’t think you’re ever going to have a chance in our team to win, because in your previous five years you never won a race, so I don’t see why you’d win when coming to a WorldTour team.' But you see, he understood very well the message, and today he is a very appreciated domestique.

"He’s tall, he has large shoulders, he’s strong. He has improved his whole game since he’s been with us. After one year, I improved his contract terms, then a year later I gave him a new contract, and he has the appreciation from the team and his teammates."