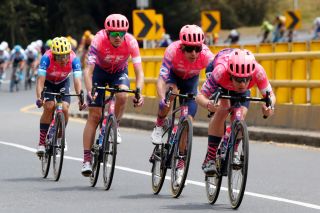 Having looked at the Tour de France long lists for teams such as Team Ineos, Bahrain McLaren, Mitchelton-Scott and Trek-Segafredo, here's the list of names we believe that EF Pro Cycling will be picking their eight-rider squad for the Tour from.

There are perhaps very few nailed-on candidates – probably only Colombian climbers Rigoberto Urán and young Sergio Higuita – but that's as a result of an extremely capable clutch of riders across the board, so competition for places is tight. As always, different personalities and their different skills and potential interactions will have to be considered in order to whittle down the possibilities to a final eight.

Tour pedigree: When you're the reigning Tour of Flanders champion, you require the best preparation for defending your crown, and in 2020 the best Classics preparation just happens to mean riding the Tour de France – or at least the first 12 days.

That will hardly impact EF in a negative way given that Bettiol is the sort of rider who could walk into most Tour teams. He's strong, willing to work for others and carries a threat. The team will utilise him in the Tour in order to ensure that he supports the squad, but they'll be careful enough to ensure that he's not exhausted after three weeks of racing.

Tour pedigree: The Preston-born climber was originally slated for the Giro d'Italia, but with so many variables now in play, EF have taken the decision to pencil in the 26-year-old for their Tour de France long list. Carthy has never raced the Tour, but there are several reasons as to why he's worth taking to Nice. First up is the route, which is peppered with mountain stages and lacking in time trials. Secondly, he arguable deserves a shot after an impressive 11th place in the 2019 Giro d'Italia and a stage win at the Tour de Suisse a month later. He won't be out of his depth.

Finally, EF require climbers if they're serious about mounting a sustained GC challenge. Selecting Carthy would weaken the team's Giro options, but the Tour is the Tour, and now more than ever – with sponsors who need appeasing – you need your strongest team.

Tour pedigree: The undisputed road captain. Since leaving GreenEdge at the end of 2015, the 33-year-old has established himself as a prominent member of the EF squad. He's a captain who leads by example, and has a calming effect on the younger riders around him as he acts as the eyes and ears for Charly Wegelius in the team car.

The Australian hasn't lost his touch for a break or even a win, as his win at the Royal Bernard Drome Classic demonstrated at the start of the year. In fact, he was flying until the pandemic halted the season. He'll go to the Tour.

Tour pedigree: The Dane is far more than just a sprinter, and, as he enters the best years of his career, EF will be tempted to bring the 27-year-old to the race. This season started well with a win in the Etoile de Bessèges, and he won a Tour stage into Carcassone two years ago, and that was hardly flat, but Cort feels like a 'maybe' at this stage. That said, there's no TTT this year, so the team can be a little more expressive in their line-up, and Cort could be a gamble worth taking.

Tour pedigree: The American narrowly missed out on a top spot in 2019 having made the final list of 10 that trained in Girona before the final selection. He used that experience to produce a string of performances in the Vuelta, and he's earned another long-list place for the Tour as a result.

There's no time trial for him to focus on this time around, but three of his best rides in last year's Vuelta came from breaks or reduced-bunch finishes. The question facing the team's management will be whether Craddock brings something different to the team that can't be found elsewhere.

Tour pedigree: Higuita's performance at Paris-Nice was one of the more memorable and exciting moments of a race that frankly shouldn't have gone ahead. The sight of a plucky South American climber who should be out of his depth but managed to hold his own in echelons and against bigger, stronger riders was something to behold. The fact that Sep Vanmarcke acted as chaperone during the week only made the tandem more appealing.

The 22-year-old only has one Grand Tour to his name, but his 14th place and a stage win at last year's Vuelta a España – plus a string of other impressive results – means that the Colombian will head to the Tour. He will likely be a protected rider, alongside Uran, until the road decides who leads the team.

Tour pedigree: The Estonian looked to be winding down his career at Astana but a new kit and a fresh challenge has reinvigorated the 33-year-old. He's probably the most dependable athlete on the team, especially if they need a rider for the Tour and the Vuelta, but it's his consistency in the mountains that makes Kangert a likely Tour rider. He's a no-frills, no-nonsense mountain domestique – a commodity few teams can boast of.

Tour pedigree: The Belgian has raced the last three Tours, so he's obviously impressing the right people at the right time, but making this year's Tour team looks like a tough ask for the 31-year-old.

Cort is more clinical, while there are better domestiques as well. Keukeleire's experience shouldn't be discounted, though, and there's the added bonus of letting him build his form for the Classics at the Tour – but that can't be the sole reason to bring a rider to the race.

Tour pedigree: The 24-year-old made his Tour de France debut in 2018 and is on the long-list once again after tackling the Vuelta a España in 2019. Martinez started this season well enough, with second place in his home tour, but the team will closely monitor his form, assuming that he makes it back to Europe in time for some pre-Tour racing.

Where he sits in the team's pecking order, however, remains unclear. Uran and Higuita will be protected riders, so a lot depends on how much emphasis the team wants to place on its climbing contingent.

Tour pedigree: The former Jumbo-Visma rider has only one Grand Tour under his belt, but he's a highly talented all-rounder. His pedigree at under-23 level was unquestionable, with a stage win apiece at the 'Baby Giro' and the Tour de l'Avenir. His development at Jumbo-Visma was hardly stunted, but EF offer more freedom and potential to grow.

It might be too soon for Powless to make his Tour debut, and he might instead benefit from another tilt at the Vuelta, where he can aim to show progress from last year. His GC results in week-long races have been very consistent, but a breakthrough win would certainly propel him up EF's pecking order.

Tour pedigree: Urán's Grand Tour record is a lot better than people give him credit for, with four top-seven rides in his last six attempts. He's finished second in three Grand Tours during his career, and while that's probably the best he'll ever do, he remains EF's best GC prospect for this year's Tour.

The route is well-suited to his style of racing, and he has a talismanic presence on the squad that make him virtually undroppable. His contract is up at the end of the season, and there are tough decisions to be made on that front, but even if Urán struggles at the Tour and Higuita flourishes, you just know that the experienced Urán will do everything he can to support his younger teammate.

Tour pedigree: His very best years in terms of Grand Tour GC results are behind him, but that doesn't mean the 31-year-old cannot play an important role in EF's Tour plans. Take the pressure of the GC away from him and van Garderen is an all-rounder who can climb with the best on his day.

He takes a disproportionate amount of grief from 'fans', but he finished second in a super-competitive Dauphiné 12 months ago, so he clearly still has a lot to offer as a rider.

Tour pedigree: The Canadian fractured his femur in Paris-Nice, but the postponement of the Tour de France from July to August-September has provided the 33-year-old with added respite and recovery time.

His Tour selection entirely rests on his form and fitness post-injury, and whether he can sustain a competitive level for three weeks. At the start of the year, Woods would have been a definite on the Tour team, but his recovery is a major factor in any decision.