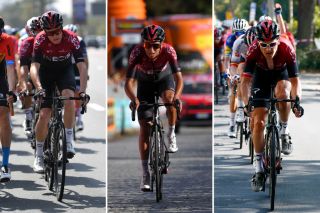 According to two sources, the Team Ineos long list for the Tour de France currently sits at 10 riders, with Froome, Thomas and Egan Bernal all included. Several other Tour veterans are also included, as are a handful of would-be debutants.

Here, Cyclingnews takes a look at the 10 riders and evaluates who will most likely make the cut.

Tour pedigree: The first name on Ineos’ Tour de France roster. Bernal was undoubtedly the strongest rider in the race last year and, even if circumstances and shorted stages helped nullify a final assault from his rivals, the likely scenario would have only seen the Colombian further stamp his authority over the competition.

His 2020 has been complicated by the COVID-19 pandemic and he remains in his native Colombia until July, but he's already talking about an unwillingness to sacrifice his chances for any of his teammates. While he doesn’t have the Grand Tour experience of Chris Froome or Geraint Thomas, it’s hard to envisage Dave Brailsford not anointing Bernal as this year’s undisputed leader.

Tour pedigree: By all accounts within Team Ineos, the four-time Tour de France winner is back to somewhere near his best and is now posting his pre-Dauphiné crash numbers in training. The extra few months away from racing will surely aid his recovery and might even bring other riders down a level or two, but even Froome would admit that the Tour de France represents a journey into the unknown.

In his favour are his experience and ability to grind out results even when not on top form, but he will need to delicately manage the situation between himself and Bernal as the Tour approaches. That said, even if Bernal is positioned as the principal leader Froome isn't necessarily hampered, as he can race with less pressure and wait for the race to open up.

The first hurdle, though, is Froome's contract situation. If he wants joint leadership or to even ensure he makes the Tour line-up he will most likely need to sign a contract extension. If he decides to leave Ineos, then what was a guaranteed Tour slot becomes somewhat ambiguous. Tellingly, he's also the only rider to put his hand up for both the Tour and the Vuelta.

Tour pedigree: Thomas might feel unlucky with his current position. Two years ago he came away with a well-deserved Tour de France title, and he followed that up with second overall 12 months later despite a far from perfect build-up – the way he came back from his heavy crash at the Tour de Suisse is often ignored.

However, with Bernal the reigning champion and Froome gunning for a fifth title, the Welshman has slid down the pecking order and few if any teams can genuinely carry the weight of supporting three Grand Tour contenders.

Whether it’s partly due to results or reputation, it feels as though Thomas is currently third in the Ineos pecking order for the Tour, and with Richard Carapaz targeting a Giro d'Italia defence Thomas is caught in a rather unfortunate position as things currently stand. We know from last year, at least that the Welshman can mount a challenge when he's up against it but team politics could be his greatest obstacle.

Tour pedigree: Pound for pound, Rowe is near enough the best all-round domestique in the current WorldTour. The 30-year-old can shimmy between Classics duties and mountain stage defences with comparative ease while he is also fast becoming one of Ineos' most experienced Grand Tour riders.

Given the top-heavy nature of the line-up, Rowe will be instrumental in any Tour challenge but it's his versatility that makes him stand out. While one can debate the hierarchy of team leadership at Ineos, few would question Rowe's position in the Tour squad.

Tour pedigree: The former road world champion is currently in Isola training with a small group of teammates and earlier this month he confirmed to Cyclingnews that the Tour de France was on his programme.

The Pole has been pivotal in previous Tour wins, although last year he wasn’t quite at the standard we’ve come to expect. The most likely scenario will see Kwiatkowski solely focus on supporting his teammates in the Tour this year before turning his attentions and whatever's left in his tank towards the Classics.

Tour pedigree: The Dutchman was signed as a promising Classics rider, but in the last two years the 28-year-old has developed into a powerful all-rounder. Stronger against the clock than Rowe, and arguably a better climber based off his Dauphiné stage win last year, Van Baarle is a shoo-in for a Tour spot this year.

Van Baarle, who earlier this year spent time training with Froome in South Africa, would walk into any WorldTour team at the Tour and make them stronger, domestique-wise. He's the last of the definites for the Tour.

Tour pedigree: Sivakov first made his desire for a Tour start public at the tail-end of 2019 when he told Cyclingnews that he would be happier riding in support of others at the Tour than mounting another Giro d'Italia challenge.

Since then, the Ineos management have talked up the Russian's chances, with Brett Lancaster telling Cyclingnews earlier this year that the 22-year-old was 'banging on the door' for a Tour place.

Although he only has two Grand Tours under his belt, a ninth place in the Giro last year and titles in the Tour of Alps and the Tour de Pologne suggest that Sivakov could neatly fit into the role vacated by Wout Poels. For the remaining two spots, Sivakov looks like the first favourite.

Tour pedigree: The British rider's career hasn't yet hit the same high notes as Sivakov but his development at Team Ineos remains impressive. He showed grit and determination after last year's Giro to bounce back with a top-20 ride at the Vuelta, including two very strong breakaway days in the mountains.

Like Sivakov, he has yet to start a Tour de France but he may be better suited to one Tour de France outing this year rather than trying to combine two Grand Tour efforts. From the outside it feels as though Geoghegan Hart is ready to step up.

Tour pedigree: A new signing, who at the age of 33, bring with him a wealth of experience and knowledge. It's unclear, however, where Amador currently rests within the team's pecking order given the fact that he’s only raced for them once since his acrimonious move from Movistar, which was only finalised in February.

It's also unclear if he will be used to help defend Carapaz's Giro crown, having formed part of the winning squad at Movistar in 2019. But you know what you get with the Costa Rican. In 15 Grand Tours he's never once abandoned, with a fourth place finish in Italy back in 2015 the highlight.

Tour pedigree: An underrated part of the team's last two Tour de France wins, Castroviejo is far more than just an accomplished rider against the clock. The five-time national time trial champion can protect his leaders on the flat and set the pace consistently through the medium mountains.

Like Kwiatkowski, he's a vital link between the flat road specialists and the mountains goats but without quite the same firepower. At 33, age isn't a problem but the question may come down to how many Tour rookies the team wants to take.