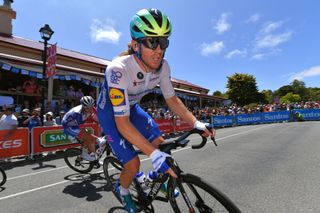 Deceuninck-QuickStep’s Shane Archbold on stage 6 of the 2020 Tour Down Under (Image credit: Getty Images Sport)

At this point last year, New Zealand's Shane Archbold was riding for Irish Continental team EvoPro Racing at the Herald Sun Tour, having previously been part of the Irish Pro Continental outfit Aqua Blue, which folded in the second half of the 2018 season. Prior to that, the 31-year-old had been part of the Bora-Hansgrohe WorldTour team – "and I wanted to get back to the WorldTour," Archbold tells Cyclingnews.

"I wanted to, and I was trying to, but I didn't know whether it was possible to get back to the WorldTour," he admits, speaking ahead of the final stage of the Tour Down Under. "Obviously I got lucky when Bora gave me a call and had a contract for me, so, yeah, sometimes perseverance does pay off."

Archbold amicably left EvoPro to return to Bora-Hansgrohe in April last year after the call came to get him back on board as part of sprinter Sam Bennett's lead-out train. For 2020, Archbold has followed his friend and the man who's often to be found glued to the New Zealander's wheel in bunch-sprint finales, Irish road race champion Bennett, to Belgian WorldTour team Deceuninck-QuickStep.

The two sprinters rode together as far back as their days with another Irish team, the Continental-level An Post-Chain Reaction squad, in 2013, and then again later for three seasons at Bora-Hansgrohe, including the year of the team's step-up to WorldTour level in 2017.

"We've been riding together for quite a few years now, and we work well together," says Archbold. "Unfortunately, Sam doesn't have all the control over who does and doesn't get contracts – otherwise last year I may have started the season with Bora, but Sam did everything he could to bring me here to Deceuninck-QuickStep, and so far it's working out.

"We've already got one win in the bag and a couple of podiums," he points out, after Bennett took out the opening stage of the Tour Down Under, and, by the end of the team's time in Australia, Bennett had added another victory at the Race Torquay – the 'warm-up event' for the Cadel Evans Great Ocean Road Race, which the team also won, thanks to Dries Devenyns.

For all his work as a lead-out man in bunch sprints, Archbold has two professional victories of his own to his name on the road: a stage at last season's Czech Cycling Tour, which came just a few months after he'd re-joined Bora-Hansgrohe, and the New Zealand road race championships last weekend, which means that the 31-year-old will now wear the silver-fern jersey on the road for the rest of this season.

Additionally, Archbold's track background has seen him take a silver medal in the omnium at the 2011 UCI Track World Championships, and a gold medal in the scratch race and bronze in the team pursuit, both at the 2014 Commonwealth Games.

Together with current Danish road race champion Michael Mørkøv, Archbold has formed Bennett's lead-out train at the early-season races, and looks forward to continuing the collaboration as the season unfolds.

"It's a trust thing," he tells Cyclingnews. "I mean, why break a winning combination? Sam was winning last year with me, and he was winning without me as well, but he would rather win with me than without me.

"He likes what I do, so to find someone you can put your full trust in is obviously difficult in any sport or any job," he continues. "It works well, and that's what he wants, and obviously now we have a new person we're trying to find that trust with – which is very easy to do with Michael.

"We've obviously got a lot more work to do to make things perfect, but hopefully we can add to our two-man lead-out to make it a three-man lead-out, which would make things a lot easier, for certain," said Archbold.

Mørkøv and Archbold already knowing each other from the discipline of track has helped a lot when it came to getting the sprint-lead-out train up to speed, says Archbold, in which the New Zealander acted as second-last man in Australia, with Mørkøv taking the responsibility as last man, trying to deliver Bennett to the line.

"I think Michael and I both have similar riding styles, which means that we can adapt to any position needed in the sprint train. If someone's having a bad day, or if certain finishes suit one of us better than the other, then we can change," he explains. "But, to be honest, for me, it doesn't really matter where I am – as long as I'm part of the lead-out train, I don't mind."

'As long as Sam's crossing the line first, that's the main thing'

"As long as Sam's crossing the line first, and I've had a part in it, that's the main thing for me," adds Archbold. "It's clear that Michael's in very, very good condition at the moment, so I think, between the three of us, we'll work it out."

With Bennett set to star as Deceuninck-QuickStep's lead sprinter at this year's Tour de France, it would stand to reason that Archbold and Michael Mørkøv, at the very least, would be part of the squad this summer. However, the recent move to eight-man squads for the Grand Tours and, even more importantly, the team's main man, Julian Alaphilippe, having had such a successful Tour last year, when the Frenchman spent two weeks in the leader's yellow jersey, doesn't make things so cut and dried.

"The team's always taken sprinters in the past, and been successful, so they've always had a reasonable lead-out train, but after Julian's success last year, it's not necessarily the case that I'll go – especially with the route of the Tour this year, which is pretty difficult for a sprinter or someone with a bigger frame like me," Archbold says, honestly.

"So I'm not fazed. If it happens, it happens – it's not a goal of mine to go to the Tour de France. I have a two-year contract, and I just want to go to races and win," he says. "It doesn't matter if it's the Tour Down Under, Paris-Nice or the Tour de France – it's all the same.

"As long as Sam's crossing the line first, that's the main thing for me," he repeats. "I'm just happy to have a contract and a job to do."