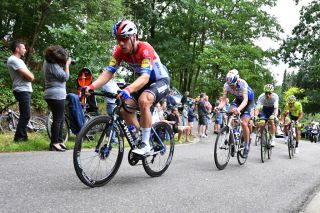 Deceuninck-QuickStep's third-year professional Fabio Jakobsen enjoyed a strong start to the season, taking three sprint victories before the COVID-19 lockdown postponed racing from mid-March onwards, and he will look to the same goals when the season restarts at the end of the month.

The 23-year-old is currently with his teammates in the Dolomites preparing for a return to racing in August, having already taken part in a practice race, the GP Vermarc Sport earlier this month.

Jakobsen, the reigning Dutch champion, took stage victories in the Volta a la Comunitat Valenciana and Volta ao Algarve, taking three podium spots along the way and the points jersey in Portugal.

A fourth place in Kuurne-Brussel-Kuurne behind winner, teammate Kasper Asgreen, and a win at the GP Monseré rounded out his strongest opening of a season yet.

Jakobsen makes it five for Deceuninck-QuickStep at Vuelta a España

"I am glad to be able to say that I’ve already won a couple of races," Jakobsen said in a team press release. "I'm happy with how I was doing; it reassures me to have those victories. I’m now looking forward to showing something in my first upcoming races, the Heistse Pijl [August 1] and the Tour de Pologne [August 5-9].

"It's been a while, but I’m still the same guy who I was in March so it can't all be gone. We're four months later, but I have the same goals for the postponed races."

Jakobsen is set to ride the second Grand Tour of his career in October, taking on the Giro d'Italia alongside Remco Evenepoel. With a possible seven sprint stage on offer on the tough mountainous route, it's no surprise that training in the Dolomites is ideal preparation for the race.

"It's definitely good for our physical condition," Jakobsen said. "I mostly join the others for my training rides, that is the group with the sprinters, lead-outs and classics riders. Sometimes we simulate sprints. or we do some specific sprint training sessions and strength exercises in the gym.

"We've also done some motor-pacing on the flat roads in the valley, but at the end of the day we had to get back to the hotel, an 11km climb. Of course, there's a lot of uphill riding involved in these weeks, with some really tough climbs for me, but it's excellent for our general physical condition."

"But again, it's good for our sprinters too to let them ride uphill now and build up their general physical condition. They will benefit from this in the coming months," Pilgrim said.

"When they get back home after the training camp, they will get a more sprint specific training program for those last couple of days before the races. And, of course, it will be vital to recover well after these two and a half weeks in Val di Fassa."

The team's lead sprinter, Sam Bennett will make his racing return at the Vuelta a Burgos later this month before lining out at the Tour de France for the first time since 2016, while Álvaro Hodeg's programme has yet to be confirmed.