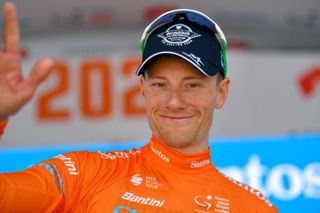 Deceuninck-QuickStep’s Sam Bennett is all smiles after taking the ochre leader’s jersey as the winner of stage 1 of the 2020 Tour Down Under in Tanunda (Image credit: Getty Images)

What a difference two days makes. After the frustration that came with not having been able to feature in the sprint finish at Sunday's Schwalbe Classic, new Deceuninck-QuickStep sprinter Sam Bennett opened his 2020 account with the Belgian WorldTour team on Tuesday, winning stage 1 of the Tour Down Under after a textbook lead out.

Bennett had the speed to hold off a furious and fast Jasper Philipsen (UAE Team Emirates), with Erik Baska (Bora-Hansgrohe) taking third. Elia Viviani (Cofidis) was fourth a few lengths back but Bennett was the one celebrating, quickly shaking off any expectation and pressure as Deceuninck-QuickStep's new lead sprinter.

"I'm happy it came," Bennett told reporters after receiving the ochre jersey as the first leader of this year's Tour Down Under. "I did feel the pressure today, so it's really, really nice to get it early.

"The only mistake was made by me: I left it a bit too late because the guys got the jump on me at one point and I didn't know how I could get the wheel back in front, but the win was definitely all due to the team's efforts. Everybody did a fantastic day today and the lead-out was perfect. We took it up really early, and controlled the front, and they just did the perfect job, so I can't thank them enough.

"I think the team had more confidence in me than I did in myself," the Irishman said with a smile.

"Today, the way they rode for me was absolutely amazing, and I just think that gives me confidence as well, seeing how much effort they put into this result, and it's just great to have this."

Bennett could make it two in a row on Wednesday's uphill finish to stage 2 in Stirling, which nevertheless tends to go the way of the sprinters. The 29-year-old said that he would certainly give it a go.

"Today was confidence building, but it is still early in the season, and I do need a bit more form. But I should hopefully still be able to manage to be up there. We'll see how it goes," he said.

"And if not, then we can try again the day after. Well, I won't try the day after," Bennett laughed, realising that Thursday's stage 3 is a hilly stage that features a final climb up to Paracombe in the Adelaide Hills, "but as a team we'll keep going."

New members of the Deceuninck-QuickStep wolfpack

Bennett pointed out that four of the team's seven-rider squad for the Tour Down Under, including himself, were new to the squad for 2020, but that the team's self-styled 'Wolfpack' mentality was present and correct regardless.

"I think this year there are in all 11 new riders on the team, and here today there were four of those, yet the team still rode the same and I think that's the experience of the other guys," he explained.

"I wouldn't say it was easy to just slot in to the sprint train, but there's a lot of experience in the team as well," he explained, referring to Michael Mørkøv, Iljo Keisse and Dries Devenyns, "and it worked really well.

"The whole team did a fantastic job," Bennett continued. "With Shane Archbold doing a monster effort near the end, going for a super-long time, which made it perfect for Mørkøv to wind it up. He could then be more explosive with his own effort. But it was a fantastic effort by everybody on the team today."

New Zealander Archbold, who's another new member of the team, agreed with his close friend Bennett that the win would only give the team more confidence for the rest of the week.

"Sometimes you can be waiting until April to get the first one on the board, so it's great that it's happened at the first race of the year," Archbold told Cyclingnews.

"It takes a lot of stress off me, and even more off Sam. Hopefully now it'll be a bit calmer for us, and we can just look forward to the next stages.

"The team was always happy for us to work out how the sprint train worked, so there was no pressure on us from the team," he added.