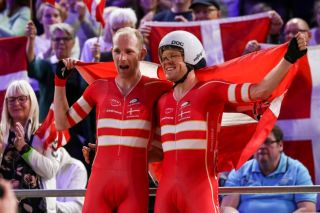 Michael Mørkøv (Deceuninck-QuickStep) has told L'Equipe how, despite the coronavirus crisis, he managed to string together a lucky, early season run of 20 days of racing that started with the Tour Down Under in Australia in January and culminated with Paris-Nice in March, by way of the Cadel Evans Great Ocean Road Race, the ill-fated UAE Tour – and a gold medal at the Track World Championships.

"I can't believe how lucky I was with the situation in the United Arab Emirates, leaving just before the coronavirus situation exploded," he told the French newspaper on Tuesday, referring to the UAE Tour being cancelled after stage 5 on February 27, with two stages remaining, after two staff members of a team tested positive for the virus.

Mørkøv had left the race after stage 4, following an agreement with his team that he would retire early from the event and return to Europe so as to be able to take part in the Madison for Denmark at the Track World Championships in Berlin, Germany.

"It was just a coincidence that I didn't stay another day at the UAE Tour," he said, with a number of teams subsequently quarantined at their hotels in Abu Dhabi.

The 34-year-old headed to Berlin, but by then had seen what was unfolding at the race he'd left behind, and decided to confine himself to his hotel room until he could be tested for Covid-19.

"Obviously, as a potential carrier of the virus, I didn't want to risk anyone's health, so we wanted to see how things developed," he explained. "I was sitting just 500 yards from the track [world championships venue] and thought I might end up watching a race I had dreamed of winning on TV, which was mentally difficult."

However, Mørkøv was able to take a coronavirus test, and train on rollers in his room in the hope that he might still be able to partner compatriot Lasse Norman Hansen in the Madison at the championships.

The day before the event, Mørkøv learned that he had tested negative for coronavirus.

"When the guy [from the Worlds organising committee] called me to say that I was free to race, I was so happy that I had to get him to confirm it three times," he explained. "I went straight to the track to do a training session in order to try to be ready, and it ended up being such a special race with Lasse – probably our best race together."

The pair were crowned world champions, beating New Zealand and Germany to the gold medal, on the last day of the Track Worlds on March 2, after which Mørkøv went on to race at French stage race Paris-Nice (March 8-15), which would eventually finish a day earlier than scheduled due to coronavirus concerns, and prove to be the last professional race before the sport's current, ongoing shutdown.