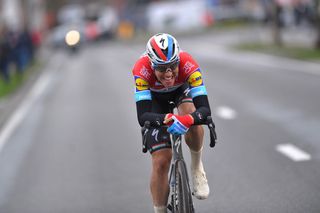 Riding high in April, shot back down in May. With the benefit of hindsight, it was always likely to happen, but Deceuninck-QuickStep's Bob Jungels didn’t feel that way when he reached the end of a fine debut cobbled Classics campaign at last year’s Tour of Flanders. His eyes were sunken into a thousand-yard stare when he spoke with reporters in the square in Oudenaarde at the finish, yet, despite his obvious fatigue, he was already shifting his thoughts towards the following month’s Giro d’Italia. Such is the life of a rider with the aptitude to do it all.

Jungels felt undaunted by the tight turnaround of just five weeks between the Ronde and the Giro, and went to train at altitude in mid-April, shedding 3kg as he set about shifting his focus from cobbled bergs to Alpine passes. The Luxembourger began the Giro with the ambition of improving on his sixth place finish of 2016, but the prospect never sharpened into focus. Jungels knew something was awry when he shipped over a minute to Primoz Roglic in the San Marino time trial on stage 9, and the confirmation arrived once the race hit the mountains.

“It was delicate,” Jungels tells Cyclingnews. “After the Classics, I was obviously full of confidence going into the Giro, but I didn’t realise that my recovery period was way too short. When I went to the Giro, I was a kilo lighter than the year before, and so very confident that I would do well. Everything was great. I went there with great GC ambitions and then I ended up not being able to follow breakaways anymore.”

Tour of Flanders a race too far for Jungels

Considering his heavy early-season programme, which yielded victory at Kuurne-Brussel-Kuurne, third at Dwars door Vlaanderen and fifth at the E3 Harelbeke, Jungels might have been forgiven had he decided to exit the Giro by the side door. Instead, he insisted on dragging himself to the finish in Verona as a matter of professional pride, placing 33rd overall.

“It’s maybe the downside of my ambitious character: at the Giro, I didn’t want to quit,” Jungels says. “I remember having the conversation with the team. I said I’m not going to quit because so many guys are here just because I had the ambition to go for GC.

“I should have been more selfish and listened to the doctor. With some reflection afterwards, I realised I’m not focused enough on myself and this is something I’m working on quite a bit, just to be more selfish a little bit, in racing and out of racing as well. In the end, it’s my career.”

Although Jungels returned to action with another brace of national titles at the Luxembourg Championships in June, his morale never recovered from his travails on the Giro. Confidence has an impalpable quality; despite a palmarès that includes Liège-Bastogne-Liège and a spring that had seen him establish himself in the cobbled Classics, Jungels found himself plagued with self-doubt over the latter part of the campaign.

“I worked myself very far down in my confidence,” he says. “Last season, I really struggling to get back on track. I did a two-week break after the Giro because I was completely empty. Physically, I was all right, but, mentally, I was just not ready to suffer again. I was really struggling with that. Towards the end of the season it got better again but I never really reached my former confidence. I was actually happy when the season was over. Now I’m more than happy to learn from those mistakes and make sure I don’t make them again.”

Jungels ended his 2019 season with a spirited attack on the Madonna del Ghisallo at Il Lombardia, and although that brief rally petered out on the Muro di Sormano, it provided succour through the winter months. During the off-season, meanwhile, Jungels was able to place his entire campaign in its proper context. The Giro and its aftermath may have been a disappointment, but that detracted little from what he had achieved in the opening third of the year, when he slotted so seamlessly into Deceunick-QuickStep’s cobbled Classics unit.

The departure of Niki Terpstra had left a berth in the line-up, while Jungels himself felt liberated to experiment with an alternative spring programme after winning Liège-Bastogne-Liège in 2018.

“It’s always easier to step away from something if you’ve achieved it already,” Jungels says. “But it’s not easy to take those decisions. Being versatile is not always a gift.”

Having won Paris-Roubaix as an under-23 rider, Jungel’s ease on the cobbles was never in question, but there was no guarantee that it would translate into success at professional level.

“I was always aware that I felt good on the cobbles, but being able to be there for the victory is always a different story,” Jungels says, although confirmation came early, on Belgian cycling’s Opening Weekend. After helping to tee up Zdenek Stybar at the Omloop Het Nieuwsblad, Jungels then helped himself to Kuurne-Brussel-Kuurne victory 24 hours later after a remarkable solo attack.

“That definitely boosted my energy and confidence level for the rest of the spring," he says.

Jungels continued the thought when racing resumed in the Flemish Ardennes in late March, delivering spirited displays in Harelbeke and again at Dwars door Vlaanderen, where he traded blows with Mathieu van der Poel all the way to the finish line in Waregem. A year previously, Jungels had found himself – successfully – engaged in an altogether more patient form of racing in the Ardennes Classics, but he adapted readily to the more open fare in Flanders.

“It’s funny, I remember getting a text from Manuel Quinziato and he said, 'Well, man, Liège and Kuurne, it’s not even the same sport,’” Jungels says. “And it is very different. Mentally it’s much harder in Flanders: you have to be focused from the start to the finish line. In Liège, you could almost wait until La Redoute before you show up on the front.

“In the Flemish Classics, everything is open from 100km to go, and this would never happen in any other kind of race. It’s the style of racing I like. Usually the harder the race is, the better I become towards the end.”

Jungels begins his 2020 campaign at the Tour Colombia 2.1, which gets under way on Tuesday. He won a stage there last year, and the South American sojourn stood him in good stead come Opening Weekend. The Omloop and Kuurne-Brussel-Kuurne are again on his agenda this time out, although he breaks with last year’s schedule in March, when he lines out at Strade Bianche and Tirreno-Adriatico rather than returning to Paris-Nice.

“I went for GC there and that cost me a lot of energy,” explains Jungels, who will also lighten his load of one-day races in order to be ready ahead of the first two Sundays in April. The 27-year-old will skip the Driedaagse Brugge-De Panne and Dwars door Vlaanderen – a sign, perhaps, of a promotion of sorts within Deceuninck-QuickStep’s fluid hierarchy following the departure of Philippe Gilbert to Lotto Soudal.

“We obviously have three or four guys who can win the races, but, in the end, you have to see who feels good and who did well in the race before. In the end, there’s always going to be a kind of hierarchy,” he says. “Of course, if you have someone like Philippe you would always give him a free card even if he didn’t feel very good. This is probably something we’ll have less of this year. I think this year we have an even more versatile team.”

That reduced diet of racing in March should leave Jungels decidedly fresher at the Tour of Flanders, where he placed 16th a year ago, citing fatigue in the final hour of racing. His calendar has also, of course, been sketched out with his (professional) Paris-Roubaix debut in mind.

“Roubaix’s going to be a bit of a surprise for me, as it’s still very different from all the other cobbled Classics,” Jungels says. “But, with this team, it’s almost impossible not to have a bit of pressure, and that’s what I like.”

There will, however, be less pressure on Jungels to shine over three weeks this season. He will take an extended break from racing after the Classics before turning his attention towards preparing for the Tour de France, where he will line up alongside Julian Alaphilippe and Sam Bennett. The arduous nature of the parcours, not to mention his experience at the 2019 Giro, have dissuaded Jungels from a tilt at the general classification, at least from the outset.

“The route is made for climbers and, even at my best weight, I’m still 10kg heavier than the best climbers so I’m not going there with the idea of going 100 per cent for GC,” he says. “If it comes up, I’ll pursue it, for sure, but I’d prefer to win a stage – preferably two – than finish seventh or eighth at the Tour.”

In other words, Jungels is applying the lessons of 2019. The man who wants to do it all is learning to pick and choose his battles – or, at least, to take one on at a time.