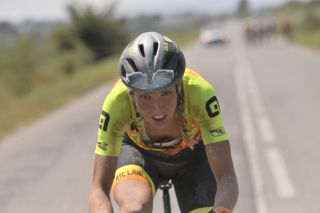 Mavi García (Alé BTC Liubliana) pulled off the double at the Spanish national championships, triumphing in the road race 24 hours after winning the time trial title.

The 36-year-old crossed the line solo for her second national road race title after a previous victory in 2016.

García broke away with Santesteban with 40km to go on the 104km course in Andalucía, putting Movistar, the strongest collective on paper, on the back foot. The pair had a lead of three minutes with 25km to go and the group behind lacked cohesion, with multiple attacks coming and going.

WIth 6km to go, García made use of a short late climb to attack Santesteban, and dispatched her with ease. She went on to raise her arms aloft, alone, some 2:10 ahead, while Merino came home for bronze at 3:50.

"I liked the course a lot, it was very very hard in the end. My power meter failed, so I had no idea of my watts, and didn't have good time references, so I just gave it everything. I reached the line more tired than ever but very happy."

In the U23 event, which was taking place within the same race, there was another double, as Sara Martín similarly backed up a Friday time trial title with road race victory in a sprint.