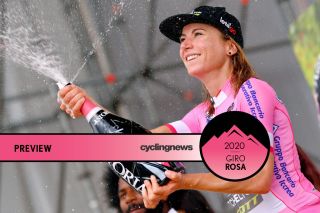 The Giro d'Italia Internazionale Femminile, more well known as the Giro Rosa, is one of only two stage races remaining on the Women's WorldTour's revised late-season calendar created after racing was halted due to the COVID-19 coronavirus pandemic this spring. It is one of the most important events on the calendar as the only women's Grand Tour, now held from September 11-19.

The long-running event traditionally offers a challenging route that utilises some of the most iconic mountain passes throughout Italy - the Stelvio, Mortirolo and Gavia [that was cancelled from last year's race due to landslides - ed.] - along with punchy stages and sprint finishes that all cater to the most riveting bike racing.

Defending champion and reigning world champion, Annemiek van Vleuten (Mitchelton-Scott), will return with a powerful team that includes co-leader Amanda Spratt in what she said is expected to be a tough edition, but not the toughest.

“The course isn’t as hard as it was last year, there aren’t as many long summit finishes, but still there are a lot of mountain finishes," Van Vleuten said. "There aren’t a lot of flat days, so it will be hard and exhausting, I think already after the team time trial on the first day we have some hard days coming up, so I’m really looking forward to it.”

Van Vleuten has dominated the last two editions of the Giro Rosa, claiming a combined five stage wins and winning the overall titles by 4:12 in 2018 and by 3:45 last year, ahead of her nearest rivals. She also won two stages of the event in 2017 where she placed third overall.

Organisers revealed the full route details last month and it will include visits to regions of Tuscany, Umbria, Lazio, Campania and Puglia. The race will include four hilltop finishes on stage 3 in Assisi, stage 4's 170.3km race to Tivoli, stage 8 at San Marco La Catola and the finale stage 9 at Motta Montecorvino. The event will open with a team time trial and organisers showcase a new Strade Bianche-style route on stage 2.

Without any major mountain passes and with the race being one day shorter this year, Spratt believes it will be much more of a tactical battle between teams and strong contenders, rather than an outright climber who wins.

“The Giro this year does not have an individual time trial and only has one longer mountaintop finish, so in my opinion it is going to be a lot more tactical," Spratt said. "The time gaps will be smaller and having a strong team, good numbers and a good game plan are going to be critical. I love the tactical side and playing the game so I can’t wait to get out there and racing."

With a winning pair like Van Vleuten and Spratt, it's hard to consider any other contenders could realistically overtake Mitchelton-Scott, however, bike racing is bike racing and there is always an element of surprise.

Anna van der Breggen (Boels Dolmans) will be one of the primary riders to watch in this edition of the race. A former two-time winner in 2015 and 2017, Van der Breggen has shown herself to be in top form this season, even despite the racing hiatus due to COVID-19. She opened the season with an overall victory at Setmana Ciclista Valenciana and went on to win the road race title at the Dutch championships and the time trial title at the European Championships in August. Her next main targets are at the Giro Rosa and the UCI Road World Championships.

Notably absent from this year's race will be Lucinda Brand, however, Trek-Segafredo will field a strong overall contender in Elisa Longo Borghini. The Italian is on track to take a big victory during the revised Women's WorldTour calendar, after supporting her teammate Lizzie Deignan to victory at the GP de Plouay and La Course. Her second-place performance behind Van Vleuten at the European Road Championships make her a rider to watch at this Giro Rosa.

Cecilie Uttrup Ludwig got her first win for her new team, FDJ Nouvelle-Aquitaine Futuroscope, at the Giro dell'Emilia, and there are high expectations for the Dane at the Giro Rosa. She finished sixth overall in the 2018 edition but has become one of the strongest all-rounders in the field since then.

Look out for Juliette Labous (Sunweb) to make her mark on the overall classification at the Giro Rosa this year. She has developed into one of the top GC riders and although she may not be able to outrank Van Vleuten, yet, she will be on the hunt for the best young rider award and a top-10 overall.

Ashleigh Moolman-Pasio (CCC-Liv) will be a rider to watch as she has placed on the overall podium in 2018. She suffered a crash while training ahead of Strade Bianche that required 60 stitches but has recovered and prepared to return to the Giro. Her teammate Marianne Vos will also be a rider to watch after winning four stages in last year's edition of the Giro Rosa.

Expect Mavi Garcia (Alé BTC Ljubljana) to be in her element during stage 2 routed along the white gravel roads of Tuscany. The Spaniard finished second to Van Vleuten at Strade Bianche but also showed strong climbing ability at the three one-day races in Spain in July where she finished on the podium at Emakumeen Nafarroako Klasikoa. She also won two stages of Tour de l'Ardeche this week, showing that she is in top form.

Equipe Paule Ka will also be a team to watch with strong riders in Leah Thomas and Lizzy Banks after strong performances at Strade Bianche and GP de Plouay, respectively.

The Giro Rosa will begin with a team time trial in Grosseto, Tuscany. The stage will offer teams a flat 16km course and an opportunity to present the first leader's jersey to set the tone for the nine-day race.

The third stage is characterised by continuous ups and downs that the peloton will tackle for 142.2km towards Assisi. There is a category 3 ascent in San Casciani dei Bagni at the 15-kilometre mark, followed by a lengthy race through undulating terrain that leads over the category 1 climb to the finish in Assisi.

It is the longest stage of this Giro Rosa, covering a distance 10km longer than the recommended UCI maximum for Women's WorldTour stages. There is one category 3 climb in Arrone after 70 kilometres of racing. The route then offers the riders a challenging, mostly gradual uphill section before reaching the final, punchy climb to Tivoli.

There are two climbs on course with the first after 50km of racing. The category 2 Madonna della Civita climb is roughly 15 kilometres in length and finishes in Itri. The second climb is much shorter and a category 3 at the 80-kilometre mark in Monte San Biagio. If the sprinters catch back on there, it could be a field sprint back in Terracina.

The peloton are treated to a category 3 climb in Sarno at 31km into the race followed by a slight but steady climb towards Monteforte Irpino. They will then contest a downhill and flat to the finish in Nola to conclude the 97.5km day.

It is a relatively straightforward stage until the peloton reach Caserta at the 82-kilometre mark where they start the climb to Sanctuary of San Michele Arcangelo, a steep 6km ascent. The riders will tackle this climb twice, on a final circuit, before descending into Maddaloni.

It is the shortest stage of the Giro Rosa at 91.4km but the peloton will face two steep climbs. The first is at Volturino and then another summit finish at San Marco La Catola.

The final stage of the Giro Rosa could significantly change the general classification. The organizers have designed a circuit race that includes the Volturno ascent. The peloton will race four laps of 27.5 kilometres, where mountain points are offered on the third lap, then an uphill finish in Motta Montecorvino.