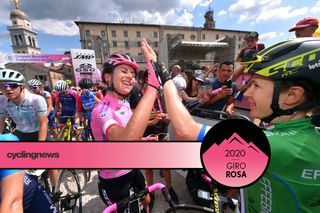 Mitchelton-Scott announced Monday that defending champion Annemiek van Vleuten and Amanda Spratt will co-lead the team at the upcoming Giro d'Italia Internazionale Femminile, set to take place from September 11-19 in central and southern Italy. Van Vleuten will line up as the two-time defending champion and said she is confident heading into this rescheduled edition of the women's nine-day race.

“I have been back in Italy to relax a bit mentally and to get a little bit more altitude exposure, because there’s still a long season ahead. I was already at a good level, so I didn’t really need to come back to altitude to train super hard. I came here with confidence and that’s also how I go to the Giro," Van Vleuten said.

"I’m quite relaxed and excited, but also nervous because what’s hard for me is that usually in stage races you cannot relax at any moment. So, it will be nine days fully focused. I learned my lesson in 2017 with the team and I think everyone learned this lesson, so it’s also really good that I have an experienced team around me that are used to riding for the GC."

Van Vleuten won the 2018 and 2019 editions of the Giro Rosa, and placed third overall in 2017. Since winning the world title in September last year, she has gone on to win six races in the rainbow jersey: Omloop het Nieuwsblad in February, the three one-day races in Spain in July, and Strade Bianche and the European Championships in August. She heads into the race as the out-right favourite to win the title for a third consecutive season.

The organisers of the Giro Rosa were forced to move their event from its traditional July spot on the calendar to September due to the COVID-19 coronavirus pandemic. They announced that the route would take place in central and southern Italy. The route will begin with a team time trial and include a 'Strade Bianche' stage in Tuscany on stage 2, along with four summit finishes - stage 3 in Assisi, stage 4 in Tivoli, stage 8 at San Marco La Catola, and the finale stage 9 at Motta Montecorvino.

“It’s cool to do this together with such an experienced team, we have good quality on the hills with Amanda Spratt and Lucy Kennedy, and also power on the flat with Moniek, Roy, and also Grace Brown who can do both, so I think we have a really good team," Van Vleuten added.

“The course isn’t as hard as it was last year, there aren’t as many long summit finishes, but still there are a lot of mountain finishes. There aren’t a lot of flat days, so it will hard and exhausting, I think already after the team time trial on the first day we have some hard days coming up, so I’m really looking forward to it.”

Spratt has finished in the top five in the last three editions of the race, stepping onto the podium in third place in both 2018 and 2019 while supporting Van Vleuten to overall victories. The Australian claimed her only stage win two seasons ago.

“I’m really excited for the Giro, this has been the period I want to be in great shape for and I feel like my level is good now. I’ve been preparing at altitude above Martigny which was a new location for me, but I really loved it there, new roads every day and a lot of great climbs, so for me it was the perfect place to prepare for both my body and mind," Spratt said in a team press release.

“The aim for the Giro this year is to win with the team. Annemiek has won the last two and I have also been on the podium both times as well. That has been very special to share the podium with Annemiek and also the whole team, these were such great team wins.

“I think we can go into the Giro this year with the same level of confidence, we have a really strong team line-up and I think this year more than ever this will make a big difference," said Spratt.

She said the parcours this year will be much more tactical than the last two editions, which included a series of high-mountain summit finishes. This year's route does include a series of climbs but nothing as iconic as the Stelvio or Mortirolo used in previous editions.

“The Giro this year does not have an individual time trial and only has one longer mountaintop finish, so in my opinion it is going to be a lot more tactical," Spratt said. "The time gaps will be smaller and having a strong team, good numbers and a good game plan are going to be critical. I love the tactical side and playing the game so I can’t wait to get out there and racing."