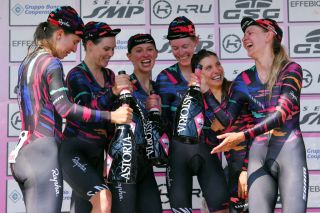 Organisers of the Giro d’Italia Internazionale Femminile have announced that the nine-day race will begin with a team time trial in Grosseto, Tuscany. The race was originally scheduled to take place June 26 to July 5, but was moved to September 11-19 as part of the post-COVID-19 revised Women's WorldTour calendar.

"We are by now used to the great sporting events," said the Mayor of Grosseto Antonfrancesco Vivarelli Colonna in a press release. "Our city in these years has become a reference point for national and international events. After athletics and baseball, it's the turn of cycling, so much so that the first pink jersey of the Giro Rosa U.C.I. Women's World Tour 2020 is assigned this year in our beautiful Grosseto.

"A great satisfaction that will require the municipal administration, together with the organizers, a substantial logistical commitment, which we are already working with commitment and dedication, with many sectors involved. Thanks to my Councillor for Sport Fabrizio Rossi who will coordinate the work of the Municipality."

Spratt on new calendar: Giro Rosa could be good preparation for Worlds

The Giro Rosa has kicked off with a team time trial for the previous three editions Aquileia (2017), Verbania (2018) and Cassano Spinola (2019). This year's opening stage in Grosseto will offer teams a flat 16km team time trial and an opportunity to present the first leader's jersey to set the tone for the nine-day race.

The first team will start at 14:00 local time from the Piazza Dante Alighieri, followed by all the other teams at three-minute intervals. The roads are wide with long straightaways, only interrupted by a few roundabouts and gentle corners. Organisers expect speeds to average 50kph as teams finish along Via Aurelia Antica (CONAD).

"There are great expectations for this sporting event," said Councillor for Sport Fabrizio Rossi. "The organisational machine has already set in motion to host the event, one of the most important on the national cycling scene, with the Sports Office in the front row.

"We will have sportspeople, staff and organizers in the city and, in addition to the aspect of the competition, we will also take care of the reception and promotion of the territory: our city has a lot to offer in this sense and the women's Giro d'Italia is a prestigious showcase that we intend to make the most of it. Important is the teamwork, now consolidated also in past occasions and a model to be repeated in the future."

Annemiek van Vleuten (Mitchelton-Scott), the current road race world champion, won the 2018 and 2019 editions of the Giro Rosa and is expected to make a return for a third consecutive title in September in preparation for the UCI Road World Championships held from September 20-27 in Switzerland.

Organisers haven't yet announced any of the other stages of the official route of the 31st annual Giro Rosa, but it will take place in central and southern Italy. Race director Giuseppi Rivolta has confirmed that 24 teams have been invited to race and he has ensured that the event will take place under strict COVID-19 protocols.

"After never-ending video conferences, sleepless nights and endless hours of studying the health protocols of the UCI, Italian Cycling Federation, Italian Government and Region deliberations, with renewed determination and unchanged enthusiasm, we're proud to represent our cycling event that draws the attention of the whole world," Rivolta said.

"I really want to say thank you to our precious sponsors, technical and commercial partners, local and national institutions, and to all my valuable collaborators, who, during this difficult moment, have chosen to support the Giro Rosa."