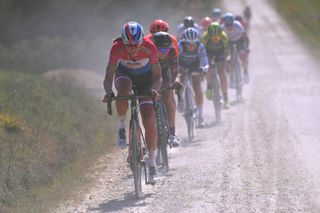 Organisers of the Giro d’Italia Internazionale Femminile announced a Strade Bianche-style stage that will include two gravel road sectors along the 124.8km route between Paganico and Arcidosso. The women will races on gravel roads in Cinigiano and Seggiano during stage 2 on September 12.

The nine-stage race was originally scheduled to take place June 26 to July 5, but was moved to September 11-19 as part of the revised Women's WorldTour calendar after the season was halted due to the coronavirus in March.

Organisers have not announced the full route details for this year's event but it will be held in central and southern Italy. The event will begin on September 11 with a 16km team time trial in Grosseto, Tuscany before moving on to the second Strade Bianche-style stage 2 on September 12.

Seggiano is also the location of the stage's only Queen of the Mountain ascent that peaks at 113.1km, just 12km from the finish line in Arcidosso.

"The Giro Rosa is the most important women's cycling event, strongly desired by our administration," said the Mayor of Civitella Paganico, Alessandra Biondi in a press release.

"It is an unmissable opportunity to make our territory known and told through an international sporting event. It will be the medieval village of Paganico, the junction between Grosseto and Amiata, to host the start of the second stage of the tour. It is not the first time that Paganico hosts departures of important sporting events, but surely this time it will be the women with their strength and tenacity who will be the protagonists.

"We are preparing to welcome in the best way the event with related events that will also see the involvement of the citizens. We will work to offer a great show to all those who may be present and to promote the beauty and versatility of our territory."

Race director Giuseppi Rivolta has confirmed that 24 teams have been invited to race and he has ensured that the event will take place under strict COVID-19 protocols.