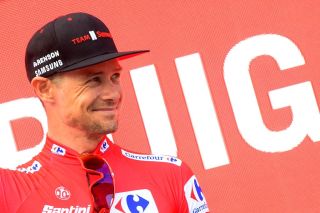 Nicolas Roche (Sunweb) won the third stage of the Digital Swiss 5 stage race in a solo performance atop the virtual Nufenen Pass. Ilnur Zakarin (CCC Team) was second at 1:10 back and Larry Warbasse (AG2R La Mondiale) was third at 1:17 back.

The third stage of the five-race virtual event was a 33.5km starting in Fiesch and to the top of Nufenen Pass.

Pierre Latour (AG2R La Mondiale) went on the early attack and led the race alone for much of the flatter sections heading into the final climb. He held steady at 6 to 8w/kg but then disappeared from screen at the bottom of the climb.

Tour de Suisse later confirmed on its Twitter feed that Latour had been "disqualified" mid-race due to "technical problems with his home trainer."

Roche, who had been following closely behind Latour, assumed the race lead and held that position all the way to the top of the 13km-long Nufenen Pass to take the race victory.

The bigger battle for second place happened behind Roche. A group of riders including Zakarin, Warbasse, Michal Kwiatkowski (Ineos), Chris Hamilton (Sunweb), Hermann Pernsteiner (Bahrain McLaren), James Whelan (EF Pro Cycling), Gavin Mannion (Rally Cycling) and Jonas Vingegaard (Jumbo-Visma) were not in contention for the win but tired to out-power each other on the steeper slopes of Nufenen Pass for second place.

In the end, it was Zakarin who took the second spot on the virtual podium with Warbasse following in seven seconds later in third place.