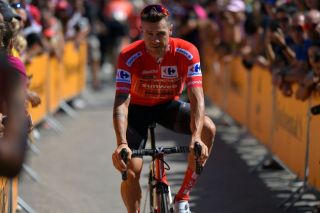 Nicolas Roche (Sunweb) wore the red jersey at the 2019 Vuelta a Espana before breaking his kneecap in a crash on stage 6. (Image credit: Getty Images)

Now in his sixteenth season in the peloton, Nicolas Roche (Sunweb) makes his Tour of Flanders debut on Sunday – in a computer simulation aboard a home trainer on the balcony of his apartment in Monaco. Cycling in the time of coronavirus.

The Irishman is one of thirteen riders competing in the 'Tour of Flanders: Lockdown Edition,' an event that will see him compete with men like Remco Evenepoel, Wout van Aert and Sunweb teammate Michael Matthews in an online replica of the final 32km of the race.

Before lining up for the virtual Ronde, Roche already participated in a Zwift social ride with Cycling Ireland on Sunday morning. All told, he will have spent well over 20 hours on his home trainer this past week, and he will do the same again in the week ahead. The racing calendar may be empty, but his days are still full.

Roche, like his peers in the professional peloton, is working diligently from home while the coronavirus pandemic is preventing them from racing on the road. With all competition now suspended until at least June 1, however, some WorldTour teams have begun to impose salary cuts on their riders or make their support staff redundant.

Lotto Soudal, Astana and Bahrain-McLaren have imposed salary cuts of 10%, 30% and 70%, respectively, while CCC Team have heavily reduced all rider contracts and laid off the bulk of their staff, at least until racing resumes. Those actions, Roche believes, were premature, given that only three weeks have passed since the conclusion of Paris-Nice, the last event before the coronavirus pandemic saw the calendar grind to a halt.

“Obviously, I don’t have all the economic reasons of the teams stopping the salary, but as riders, we are still working, and working even harder,” Roche told Cyclingnews. “Imagine a cyclist who’s already locked up in his house or apartment and not allowed to train outside. He has to spend 20 hours a week on the home trainer and he’s being extra careful with the diet, and now on top of that they tell him he’s getting a 30% salary cut. It’s not great for his morale, is it?

“There hasn’t been any talk of it at Sunweb, and I’m very grateful for that. Things could change depending on how the economic situation develops over the next couple of months but so far, we’re only a month into it, so I think it was maybe a bit sudden for teams to cut salaries. If this was a crisis of six months, I might have understood.”

Pay cuts have been already enacted in a number of sports such as football, where revenue from ticket sales and television rights is being lost due to the suspension of competition. In cycling, however, the revenue of teams comes from sponsors – who ostensibly agree their commitment before the year begins – rather than from ticketing or television.

According to UCI rules, the budgets – and thus, the payroll – of each WorldTour team must be confirmed two months ahead of the start of each season. Each applicant is required to submit a budget and bank guarantee by October 1 that “must take account of all the riders [the team] intends to recruit” for the following season.

“I was surprised that the teams did it so quickly more than anything else. I didn’t think one month or two months with no racing would have had an impact on the budget of a team,” Roche said. “I kind of half understand the salary cuts in football, but cycling is a sport that doesn’t depend on filling a stadium or on millions of euros of money from merchandising or on TV rights.”

The riders' union the CPA has been represented at teleconferences of cycling’s stakeholders in recent weeks, and in an email to its members last week, the body pledged to study each team’s case individually.

“My own manager at Trinity Sports wrote a letter to all the stakeholders in cycling basically saying what I’m saying: it seems very sudden that some teams have cut salaries just three or four weeks on from Paris-Nice,” Roche said. “I could understand if it was after six months, or even four months. We’ve stopped racing but that doesn’t mean we’ve stopped training.”

In late February, before the coronavirus pandemic began to make itself felt in Europe, Thomas De Gendt (Lotto Soudal) offered a joking description of his profession on Twitter: “When people ask what I do for a living I tell them I work in the advertisement business. I make advertisements and create content for multi-million euro companies.”

The Belgian’s words have felt increasingly prescient in the weeks since. Bereft of competition on the road, riders are seeking out novel ways to continue to earn their keep and provide exposure for their sponsors. Both De Gendt and Roche, for instance, are among the 13 participants in Sunday’s turbo trainer edition of the Ronde, broadcast live on Sporza in lieu of the real thing.

"It’s a great initiative. You have to give credit to them for trying something, so when the team asked for volunteers, I put my hand up. I think in this moment of crisis – and it is a moment of crisis, for everybody – it is important to give it a go and try to support these initiatives,” said Roche, who also finds himself doubling as a social media manager.

“I’m probably posting ten times more than I used to. I’ve done lives with the team and on my own social media. I tag our sponsors and try to give them as much visibility as I can on my own. But it’s also for the fans who are at home and as hungry for cycling as we are.”

Roche’s promising 2019 Vuelta a España was cut short by the broken kneecap he suffered on stage 6, but he recovered quickly and wintered well, beginning his 2020 campaign with a solid 7th place at the Tour des Alpes Maritimes et du Var.

Since then, Roche has been compelled to spend more time on his home trainer than at any point in his career. Indeed, he keeps his ‘good’ turbo trainer in Ireland – “the weather can be a little more adventurous,” he joked – but his team scrambled to provide him with a Zwift-compatible trainer in Monaco once the lockdown was enforced. Roche has since settled into a daily routine, training virtually with his brother Alexis, a promising espoir, each morning.

“I train online with my brother and a friend of mine, Laurent, who lives nearby in Monaco, for about two and a half hours,” Roche said. “We Facetime while we train. It’s never going to be as good as a real spin but it’s as good as it can be on your balcony.”

Roche does another couple of hours in the afternoon and, every second day, adds an extra hour in the evening. He is in regular contact with Sunweb coach Brian Stephens, and each Monday, the team holds video conferences with the riders. “The discussion makes sure you’re still involved,” said Roche.

Indeed, in a time of physical distancing, maintaining contact is at least as important to a rider’s wellbeing as maintaining condition. Roche has been cloistered away at training camps many times over the course of his career, but the solitude of self-isolation is rather absolute. He spent part of February training in South Africa with fellow Monaco resident Michael Matthews. In the past three weeks, he has been limited to waving to the Australian from his balcony.

“At an altitude camp, you still have a roommate, you meet people at breakfast, you say hello the people on reception. In Monaco, I live alone, so my only interaction is with the concierge in my building when I go down for my post every morning,” he said.

“The most difficult part is not meeting people, but with social media, WhatsApp and everything you stay in touch. So you’re by yourself but you’re never alone.”