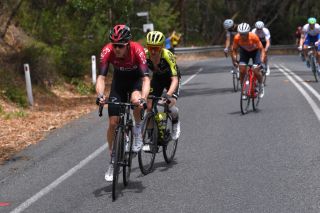 The Australian’s emphatic victory in Race 5 was his second win of the Digital Swiss 5, following his triumph on the opening day. In a repeat of that result, Dennis beat Nicolas Roche (Sunweb) into second place, while Jonas Vingegaard (Jumbo-Visma) took third place.

"Today was a lot harder than stage 1 but I had Nico chasing me and I could see Schachmann was as well. I went out quite hard and tried to hold onto it," Dennis said.

"[Roche] just kept going, I could feel him coming and I sort of measured my effort to what he was doing and made sure I had a little bit left at the end to kick again."

Race 5 saw the contestants take on a virtual 36km course from Camperio to Distentis-Sedrun by way of a simulation of the Lukmanierpass.

James Whelan (EF Pro Cycling) took an early lead on the 15km ascent with Max Schachmann (Bora-Hansgrohe) and Ilnur Zakarin (CCC Team) among those chasing, but Dennis hit the front midway up the climb.

Dennis had a sizeable advantage by the top and he took advantage of the long descent to maintain his lead by keeping his pace steady at the maximum allowed speed of 72kph.

Nicolas Roche (Sunweb), winner of Race 3, was again to the fore here, and he battled gamely with Schachmann in pursuit of Dennis on the approach to the final 6km climb to the finish.

On the climb itself, Roche pulled clear of the German champion and began to close his gap to Dennis, at one point closing to within 80 metres. The Irishman’s was unable to get any closer, however, as Dennis managed his advantage calmly to win by 12 seconds, with Vingegaard coming home a further 25 seconds back in third.

Chris Hamilton (Sunweb) placed 4th ahead of Schachmann, with Jai Hindley (Sunweb) next across the line.