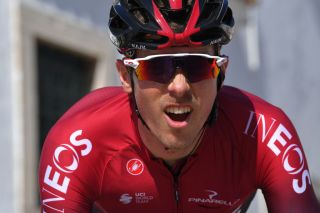 Australian duo Whelan and Luke Durbridge (Mitchelton-Scott) got away from the peloton early on, putting in an effort in the vicinity of 7w/kg as they hit the early slopes of the race's first climb. With no drafting simulation on Rouvy it was every man for himself out on course.

Dennis and his Ineos teammate Cameron Wurf moved away from the peloton 6km in, making it four Australians at the head of the race. Dennis would soon move his way into the lead, passing Whelan 10km into the effort as Durbridge and Wurf fell back. Further back, Remco Evenepoel (Deceuninck-QuickStep) was making a move up to fifth place.

Dennis was timed at 28:17 over the top of the first climb, leading Whelan by 21 seconds. Nicolas Roche (Team Sunweb) had jumped up to third, 35 seconds down, with Evenepoel the only other man within a minute, 56 seconds back.

Dennis' lead stretched out to 39 seconds after the descent, with his time trialing experience clearly paying off in measuring his effort. At the first checkpoint of the race's final climb, he had moved to 55 seconds clear as Roche closed in on Whelan.

Evenepoel had lost some time however, drifting to seventh place almost two minutes down.

Roche moved definitely into second place later on the climb, but it was too late to try and catch Dennis, who continued on to victory in virtual Leukerbad.