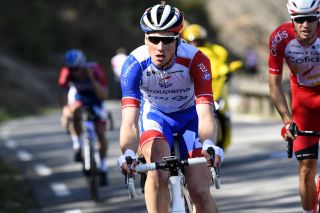 The Swiss rider held back as Michael Matthews launched a huge attack from the gun and soloed well ahead of the field for most of the race. Küng slowly worked his way through the field on the first climb, hanging back as Ethan Hayter (Ineos) and Silvan Dillier (AG2R La Mondiale) attacked.

On the second climb, Küng joined Michael Gogl (NTT) in pursuit of Hayter and on the descent, the Swiss rider timed his surge perfectly to blast down the 'descent' and solo in pursuit of Matthews.

It took a huge effort, but Küng caught the Sunweb sprinter with 2km to go and then it was game over for Matthews, who struggled to match the Swiss rider.

On race 2, Matthews held back and tried to get Küng in the last kilometres but finished third. This time, he said, he wanted to try the opposite tactic.

"I learned from the race two days ago you need to go out hard if you can and then just bring it home. I knew I had to try to get out early and try to hold him off but he was too strong again," Matthews said.