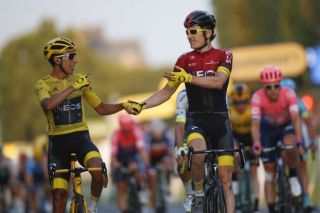 Pinarello and Team Ineos celebrated a year of the Pinarello Dogma F12 on Friday, with the bike delivering the British squad to 24 victories across its first year of use. Along with the big one – Egan Bernal's Tour de France win – there were plenty more big moments for team and bike since its first race at the Tour de Yorkshire.

Here, we take a look at the Dogma F12's successes with Team Ineos over the past calendar year, picking out the top five moments in the bike's short history.

A debut victory in Yorkshire

Shortly after the bike's unveiling on May 1, the new-look Team Ineos headed to northern England for the Tour de Yorkshire, their first race in their new colours and second race on the Dogma F12.

Consistent racing by the versatile fastman Chris Lawless saw him finish on the podium three times in four days, taking over the race lead in Scarborough after being narrowly edged out for the stage win by Alexander Kamp.

The Briton carried his narrow advantage into the tough final day to Leeds, where he and Eddie Dunbar rode smartly in the finale to seal overall victory ahead of Greg Van Avermaet, as Dunbar took third overall. A winning start for the Pinarello Dogma F12.

Highs and lows at the Dauphiné

The Critérium du Dauphiné should have been a final chance for four-time Tour winner Chris Froome to tune up before going to battle in July once again. He lay eighth overall after three days of racing, but disaster struck while he was riding a recon of the stage 4 time trial.

Froome crashed on a descent, hit a wall hard, and was rendered out of action for months by a laundry list of injuries. Egan Bernal and Geraint Thomas filled in emphatically at the Tour, finishing first and second, while Froome's long road back to his best is still ongoing.

The team recovered from Froome's brutal crash later in the Dauphiné, however, with Wout Poels triumphing on the penultimate stage to the summit finish at Pipay, and Dylan Van Baarle beating Jack Haig on the final day.

Colombian Egan Bernal delivered the team's biggest victory of the season, taking the overall win at the Tour de France on his second participation at the race. The 22-year-old had chipped away at Julian Alaphilippe's race lead on stage 15 to Foix and stage 18 to Valloire, setting up his raid on stage 19 to Tignes.

Bernal launched on the Col d'Iseran, gaining two minutes on Alaphilippe and one minute on his other rivals by the time he crested the summit. Confusion reigned soon after, with the stage eventually cancelled due to landslides blocking the valley road. The damage was already done though, Bernal was in yellow by 45 seconds and en route to overall victory.

Bernal celebrated his win in Paris with a custom-painted Dogma F12, hand-signed both by himself and by Fausto Pinarello

There hasn't been much racing in 2020, with the shortened Paris-Nice the final big race before the season was shut down amid the COVID-19 coronavirus pandemic. One of the stories of the early season, though, was Froome's return to racing.

After months of rehabilitation from his Dauphiné injuries, Froome made his comeback at the UAE Tour, the first race where coronavirus hit the pro peloton.

There were no big results for Froome, but the emotional comeback was a major milestone for the 34-year-old as he seeks to add a fifth Tour de France crown to his collection, whenever the next one may be.