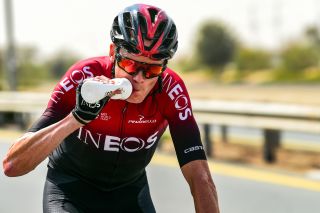 Chris Froome was back in action at the UAE Tour (Image credit: Bettini Photo)

After eight months out through injury Chris Froome (Team Ineos) made his long awaited comeback at the UAE Tour, finishing safely in the bunch as sprinter Pascal Ackermann (Bora-Hansgrohe) roared to victory on stage 1.

While Ackermann accepted the bouquet and cheers from the modest gathering of fans at the finish, it was Froome who held a celebration of his own kind outside the Team Ineos van.

Flanked by his brother and immediately congratulated by former teammates and the rider who was with him when he crashed at the Dauphine last year – Wout Poels – a clearly emotional Froome admitted that finishing in the bunch after such a long absence from professional cycling felt like a major victory in itself.

"It feels good, it feels really good. It’s a great feeling to be back in the bunch and there were so many riders coming up to me and saying it was good to see me back," he told Cyclingnews and a small group of other media.

"I showed that it was possible to come back after so long. It’s still a way to go until I’m back to the level I was at but the first feelings were really good. It felt good to just have a race number on, have my elbows out again, and be fighting in the bunch. It feels good to be a bike racer again."

"To be honest I was really excited this morning. It felt like being a neo-pro again. I don’t know… it was only eight months out but it felt like longer."

Much of the last few months have been dominated by discussions over whether Froome can return to the pinnacle of the sport. A younger generation has emerged in his absence and even without the injuries; Froome is closing in on 35.

However, for the briefest of moments the questions over a fifth Tour win and all that comes with it could be put to one side. And even though a flat sprint stage at the UAE Tour matters little in terms of his palmares, today at least marked a significant moment of joy for the four-time winner. He was clearly elated and relieved as he spoke.

When asked to put today’s results against the context of the victories he has notched up, he replied: "Obviously it’s nothing to write home about but obviously it’s a big victory to be on the start line and be in the bunch. Two or three months ago I could barely walk. I had a limp, so to be back racing at WorldTour level is a huge victory in itself."

There will certainly be tougher days ahead, not just here in the UAE but when Froome returns to racing and continues his rehabilitation and recovery.

He still has the matter of a weaker right leg, and the fact that his left side is still overcompensating for the imbalance. He might be able to ride through a flat race that only sparks to life in the closing kilometres but at some point, in a more mountainous setting, he will be put through a sterner examination.

For now, however, this was a moment for him and his team to savior.

"I know what condition I’m in. I know that I’m not in winning condition but I can get through the race and do what I can for the team. Like I said, it’s my first race after eight months, and I can’t set my expectations too high. To just being here is a big victory for me," he concluded.