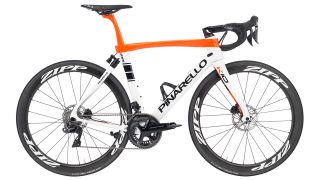 As far as Italian bike brands go, Pinarello is relatively young, with Giovani 'Nani' Pinarello opening the doors of his workshop in 1952. But, given seven of the last ten Tour de France’s have been won aboard a Pinarello bike, clearly, Nani was onto something special.

Nani had a stint as a professional rider, chasing races around Europe from 1946 to 1952; his most notable result was earning the Maglia Nera (Black Jersey) for taking last place in the 34th Giro d’Italia. Earning the black jersey was no easy feat, and riders would hide in barns and give themselves flat tyres to lose time — Nani loved to tell stories of his schemes to maintain his position at the back of the peloton.

Slated to race the 1952 Giro, Nani was forced to give up his spot on the roster to Pasqualino Fornara; however the team paid him 100,000 pounds for stepping aside, and the Italian used this sum to invest in a small bike workshop that would eventually grow into the brand we know today.

Half a century later Pinarello bikes have found their way to the top step on podiums at the biggest races around the world. With Nani’s son Fausto now at the helm, the majority stake in the brand is owned by L Catterton a private equity firm that's involved with luxury brands like, Louis Vuitton, Moët and Hennessy among others.

Pinarello is still very much a boutique brand, and its bikes usually carry a hefty price tag, but the frames offer some nifty tech which is backed by a modern race results sheet no other brand can match.

Pinarello produces offers a surprisingly large range of bikes, with everything from the flagship road racer the, Dogma, to commuters and even mountain bikes and e-MTBs.

Arguably ahead of its time when it came to gender-specific geometries, Pinarello only offers its bikes in a single unisex frame and supplies bikes to both the men’s and women’s WorldTour - if only its marketing department had the same track record.

Where possible, Pinarello uses its in house components brand MOST to finish bikes, and expect to see bars, stems, seat-posts and saddles from the sister brand.

Scroll down to see Cyclingnews’ roundup of Pinarello road bikes available to buy for 2019 and 2020.

Improvements to stiffness and aerodynamics
Price

Pinarello’s Dogma is the brand's race platform, and the F12 is the latest evolution of the frame. The current race bike of Team Ineos, the geometry is mostly unchanged from the F10, bar a slightly shorter head tube, and a marginally longer dropout to crown length.

The new F12 is an out-and-out aero bike and is designed around the MOST Talon integrated cockpit which combined with a new fork and frame is claimed to offer an 8-watt gain at 40kph. Pinarello also says the new bike offers a 10 per cent improvement in lateral stiffness over the F10.

Available in both rim and disc brake versions, the latter now uses direct mount brakes, which offer superior power over their single pivot competitors. Pinarello hasn’t just bolted rotors onto the frame and misspelt disc, they’ve designed a new fork that’s said to offer a 40 per cent reduction in twisting forces from the brake caliper.

All up with 13 available frame sizes, and 16 bar width and stem length combos of the Talon Ultra on offer, Pinarello offers the Dogma F12 in 208 combinations.

But it doesn’t stop there, the Dogma F12 is also available in an X-Light version with both rim and disc brakes and is claimed to shed 100g from the frame weight of the standard bike.

It’s been demoted to a second-tier race bike, but that only affects the price tag

Even though it’s been superseded, the F10 is no slouch. With a race geometry, the F10 is available in rim and disc brakes versions and features Pinarello's trademark asymmetric frame.

On the geometry chart, it’s pretty similar to the F8, but this is where the resemblance stop. As you’d expect with any new version of a bike, it's stiffer stronger and lighter than its predecessor, but the F10 also received major aero upgrades including the concave downtube, borrowed from the Bolide TT bike.

The F10 was also the first Pinarello race bike to feature disc brakes. At its launch, Fausto Pinarello famously said he didn’t think that race bikes needed disc brakes. About six months later the F10 Disk was launched, specced with 12mm thru-axles front and rear and a new beefed-up fork and the ‘ForkFlap’ a small aerofoil said to improve airflow.

Designed for Team Sky to use during the spring classics, the Dogma K10 features a slightly more relaxed geometry clearance for 28mm tyres, and the option of Pinarello’s electronically controlled eDSS suspension.

The elastomer spring can flex along with the chainstays to offer 11mm of travel to soften square edges or cobbles. It uses a piggyback design with a small exterior oil reservoir complete with a hydraulic damper that can sense impacts an open in 100 milliseconds staying open until the road surface smooths.

The small rear shock claimed to weigh 320g can be paired to, and controlled by a Garmin or the E-Link junction box on the downtube. View Deal

At first glance, the Pinarello Nytro looks like a Dogma with a beefy downtube, in reality, hidden inside is a Fauza e-bike system and battery which can add up to 400w of power and 60nm of torq.

The frame does borrow design cues from the F10 and is made from T700 carbon, though the wheel based and head tube grows for a stable handling and a relaxed position.

Only available with disc brakes, the Nytro comes in both road and gravel versions.

If rear suspension just isn’t enough for you, the Dogma FS incorporates the brands eDDS suspensions and adds the HiRide suspension fork at the front. Like the rear, the front suspension fork is electronically controlled and offers 20mm of travel using an internal metal coil spring controlled by hydraulic damping.

Both use inbuilt sensors that let identity and react to various road conditions, customising the damping of both ends independently so that no efficiency is lost to wallowing in the travel.

Given the Dogma FS is purpose-built for rough roads and has room for up to 28c rubber, we are surprised to see it only offered in rim brakes.View Deal

A Pinarello that verges on value for money

When the Pinarello Prince was launched, it was the brand's flagship racers before it disappeared from the brand's line-up. In 2018 it was back, and at first glance, it looks just like the Dogmas. You’ll still find the asymmetric frame profile, shrouded bottle cage mount, flat back tubing, the bike comes in both standard and ‘Easy Fit’ geometries, with the former slightly more upright than the Dogma.

Pinarello seems to downplay the Prince using words like docile to describe the bike it is marketing materials but don't be fooled, it’s far from a noodly slow handling Fondo bike.

Available as an Ultegra build, the Prince has room for up to 28c tyres and costs about half the price of the Dogma. The savings are thanks in large part, to the lower grade T700 that makes up the frame. The Prince FX sees a slightly pricier T900 carbon and both are available with single pivot rim brakes or discs.

Almost as good as the Dogma, at a fraction of the price

Rolling out in 2016 the Gan is Pinarello’s endurance bike; however, it's derived from the F8 with a 72.8-degree head angle, and 73.4-degree seat angle (Size 540). Pinarello does offer a more relaxed GanK which sees a shorter top tube, a bit more stack and the brands FlexStays at the rear

The frame is made using T600 carbon which adds some weight and comes with a reduction in stiffness, but these lower grade carbons are a bit more resilient to crash damage. While the Gan still gets the asymmetric frame, Onda fork, internal cable routing, a threaded bottom bracket and flat-backed tubing; it lacks some of the more cutting edge features like the shrouded bottle cage, and there is only room for a 25c tyre — the Gan K will take a 28c.

All the Gan’s are built with a Shimano 105 groupset, MOST bars, stem and saddle and Fulcrum Racing Sport or Racing 6 DB wheels depending on the brakes.

Gravel bikes have exploded over the past few years, and while the Pinarello offered the Gan GR for a few seasons, the Grevil is its first fully-fledged gravel grinder. The somewhat later entry into the segment allowed the rest of the industry to settle on axel and brakes standards, and geometries and the like allowing the Grevil to stay up to date for more than six months.

The Grevil will accept up to a 700cx38mm tyre or 650b x 2.1in for when things get rowdy; the also bike features flat-mount disc brakes, 12mm thru-axels and a dropped drive-side chainstays for max tyre and chainring clearance — actually the entire back end is wildly asymmetrical.

Pinarello offers two versions of the gravel bike, the Grevil and Grevil +, the only difference being the former is made with T700 DU carbon, and the later is made using the Torayca T1100 1k Dream Carbon as the F12.

Given this is a Pinarello we are talking about here, it’s no surprise to see the same Flatback tubing, wavey fork complete with Fork Flaps and shrouded bottle cage.View Deal

With a relatively traditional Italian geometry placing stability above agility, the Angliru is an excellent beginner bike. The brand has built in a bit of stack and shortened the reach slightly to accommodate riders who may not have developed the flexibility for more aggressive fit.

With the Onda wave fork from a few generations back, the frame sees a bit of aero tubing, though there's no FlatBacked tech here.

The bike does see an asymmetric frame profile and the Think2 cable routing that allows for both mechanical and electric drivetrains — though we'd venture a guess an Angliru owner would upgrade to a new bike before installing a new drivetrain.View Deal

Offers the Pinarello feel without the price tag

Occupying the entry-level step of Pinarello's range, the Razha features a relaxed geometry, and with a longer wheelbase and slack angles for stable handling. The frame is made from T600 carbon and shows many of the design cues of when the brand went through its ultra wavy phase.

Even sitting so low in the brands range the bike still gets a creak-free threaded bottom bracket, internal cable routing and an asymmetric frame profile.

Pinarello Rhaza models are available in both rim and disc varieties, and will take up to a 28mm tyre.View Deal

For the TT specialist with deep pockets

Pinarello's TT offering is the Bolide which debuted at the 2016 Giro d’Italia. For this version, the brand shaves a bit of weight and has pushed the UCI’s rules about aero shaping to the limit.

The Bolide is where we first saw the fork tips and concave downtube, designed to keep the rider's bidon out of the wind, a feature that has now permeated through the brand's lineup.

The Bolide comes in a rim braked 'road' version, as well as two-disc brake triathlon versions, which feature more pronounced aero tubing as the bike is no longer subject to the UCI’s rules and features an integrated top tube and downtube box, both of which can be removed.View Deal