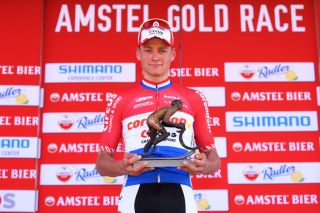 Mathieu van der Poel's Alpecin-Fenix is confirmed among the six wildcard teams that are invited to compete at the 2020 Amstel Gold Race held on April 19.

Van der Poel won the 2019 Amstel Gold Race after dragging a small group up to a chase group, and then up to the front group, all in the closing kilometres of the race. After making contact with the front of the race, inside 300 metres to go, he went on to sprint for the victory.

Van der Poel's Alpecin-Fenix squad has also been confirmed as a wildcard team for Strade Bianche, Milan-San Remo, Tour of Flanders, Paris-Roubaix, and the Ardennes Classics.

He has also made it clear that he will focus on the cross-country mountain bike race at the Tokyo Olympic Games this summer, and has expressed an interest in racing the Vuelta a España, though the chances of his team taking one of the wildcard spots look slim.

The 25-year-old will defend his rainbow bands at the UCI Cyclo-cross World Championships next weekend in Switzerland before taking a break and shifting to the road.