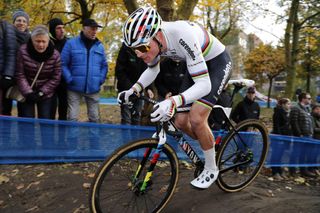 Mathieu van der Poel has hinted he would like to ride the Vuelta a España in 2020 as he continues to his development as a road rider, but race director Javier Guillén has admitted he has just two wildcard invitations places available, with Spanish ProTeams having priority.

The route of the 2020 Vuelta a España will be presented in Madrid on Tuesday. The race starts with three stages in the Netherlands but that has not helped Van der Poel's case.

"I only have two wildcards and there are three Spanish ProContinental teams, so it's almost impossible to invite Corendon-Circus," Guillén told Dutch website WielerFlits.

"I am very honored that a world class rider like Mathieu van der Poel wants to ride the Vuelta a España. Van der Poel is not only a huge star in modern cycling, he also races aggressively. But it's very complicated."

Van der Poel back in cyclo-cross action this weekend

Van der Poel again plans to mix road racing with cyclo-cross and mountain biking in 2020, with a gold medal in the mountain bike event at the Tokyo Olympics his biggest goal. He and his Corendon team have carefully planned his calendar for 2020, with places in the major spring Classics assured thanks to Van der Poel's aggressive racing and success in 2019.

However, under UCI rules Grand Tours are limited to 22 teams of eight riders. There are 19 teams in the 2020 WorldTour after the addition of Cofidis, while Total Direct Energie has earned an automatic wild card to the Grand Tours after finishing top of the 2019 rankings. The French team has given up its place in the Giro d'Italia but plans to ride the Vuelta.

"That means that I only have two wildcards left, while there are already three Spanish teams begging to participate in the Vuelta: Caja Rural-Seguros, Burgos-BH and Fundación Euskadi. And we have to disappoint one of them, while maintaining the philosophy of promoting Spanish cycling," Guillén said.

"As much as I would like it, it will therefore be almost impossible to invite Van der Poel's team."

WilerFlits suggested that the two Vuelta wild card teams will be decided after the Itzulia Basque Country race in mid-April.