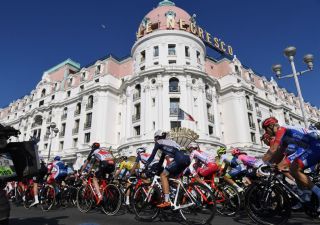 Paris-Nice concluded on Saturday, likely signalling the premature end of the 2020 spring cycling calendar as race after race falls victim to the coronavirus Covid-19 pandemic.

If the race does turn out to be the final WorldTour event until May, June or even later, then at least we can say that it was a good one.

From stage 1 in Plaisir to the final stage, which came a day early on the summit finish of Valdeblore La Colmiane on Saturday, there was drama, excitement and surprise on every day of the race.

Bora-Hansgrohe's Max Schachmann became the tenth rider to lead the race from start to finish, building on the promise he showed throughout last spring, but there were plenty of talking points besides.

Here are five of the big ones from this year's race.

Nairo Quintana is back

The Colombian never went away, but it's hard to deny that the past two campaigns have been tough for Quintana. He took five wins across 2018 and 2019, but placing tenth, eighth, eight and fourth at the Tour de France and Vuelta a España led to speculation that the 30-year-old may already be past his best.

Cue a change in team to French squad Arkéa-Samsic after eight years with Movistar. So far, the surprising switch has been nothing but positive for Quintana. After time trial silver at the Colombian National Championships, he headed to France in February, winning the Tour de la Provence and Tour du Var as well as summit finishes atop Mont Ventoux and Col d'Éze along the way.

Last Sunday he took the start at Paris-Nice hoping to make it three out of three, but a day later his hopes were in pieces after a crash just as the crosswinds hit and split the peloton.

He wouldn't be denied another mountain win, though, attacking on Valdeblore La Colmaine to win the final stage by 46 seconds, putting 56 seconds into the Schachmann GC group in just 3.5 kilometres.

"We were highly motivated to do things well and have been working hard. The team worked hard catch the break and then I did what I had to do," he said after the stage.

"There was nothing I could do for the GC. I crashed badly and l lost too much time that day. So, I knew I had to attack today, because I wanted to bring joy to the team because of the effort that everyone has made."

Quintana might not have won Paris-Nice, but with his ride on stage 7 adding to his results last month, he's been one of the top riders of the season so far.

The 2020 season was set to be a transitional year for the German team, with stage race leader Tom Dumoulin leaving for Jumbo-Visma and young climbing talent Lennard Kämna heading to Bora-Hansgrohe.

In came a total of seven neo-pros, along with German strongmen Nico Denz and Jasha Sütterlin, as well as the Classics man-slash-climber Tiesj Benoot from Lotto Soudal. The team hasn't looked back, already recording seven wins compared to nine for the whole of 2019. In contrast, Dumoulin has still to make his debut with Jumbo-Visma after illness slowed his training.

Benoot made his debut at Opening Weekend but shone at Paris-Nice. He was among the main instigators of the big split in the crosswinds on stage 1, later jumping away 30km from the finish with Julian Alaphilippe in his wheel to eventually take third on the stage.

Three days later, it was Søren Kragh Andersen's time to shine as the Dane took time trial victory in Saint-Amand-Montrond, his first win since Paris-Tour 2018. He was out in the break on stage 6, part of a masterclass from the team which saw Benoot attack late on to take the stage by 22 seconds ahead of teammate Michael Matthews, who was up in the chasing GC group.

The final stage saw Benoot strike out again, going for overall glory near the top of the summit finish in a brave attempt to pull back his 36 seconds deficit on Schachmann. He didn't pull it off but it says something that he was the only rider to escape the elite GC group, Quintana aside.

"It's a shame that I can't go to the Classics with these legs, but there's nothing I can do about that," he said afterwards. "My team has had a positive influence. I'm happy that the choice I made this winter, about which there was a lot of doubt from the outside, was the right one."

Benoot and Matthews were set to team up in the cobbles and Ardennes this March and April, and given how the pair are going, it is indeed a shame they won't be able to show what they can do.

Higuita's rise to prominence in the past year or so has been a swift one. He made his European debut with Fundación Euskadi in January, finished seventh at the Vuelta a Andalucía, and then had his summer move to EF Pro Cycling brought forward to May.

That month he took second at the Tour of California, and by the end of the Vuelta a España – his first Grand Tour – he had a stage to his name as well as a 14th place on GC.

He flew out of the gates this year, winning the Colombian National Championships road race by 1:15 before winning a stage and the overall at the Tour Colombia 2.1, a race EF dominated with three stage wins.

At Paris-Nice he was up there from the start, making every split in the crosswind-hit opening stages with a little help from Sep Vanmarcke and Tom Scully. He moved onto the podium on the penultimate stage but didn't have enough to make his way to another top spot on the final day.

Still, third overall and a 15-minute win in the young rider's classification is a more than solid end to his spring.

"In the end, I just felt like I didn't quite have it in me to make the move in the final kilometres, but I'm happy we made the podium," he said after the race. "In general though, it's been a good start to the season for me from the National Championships through to today."

The Tour de France beckons for Higuita later this year. There, he's set to form an EF Colombian triumvirate with Rigoberto Urán and Daniel Martínez.

Slim pickings for the pure sprinters

Last year's edition of Paris-Nice saw four sprint finishes, with Dylan Groenewegen and Sam Bennett sharing the spoils. There were four in 2017 too, and three the year before. This time around, onlookers could have been forgiven for forgetting that the race was packed with sprinting talent.

Four of our five top-ranked sprinters from 2019 were at the race, in the form of Caleb Ewan, Pascal Ackermann, Elia Viviani and Sam Bennett. If that wasn't enough, Peter Sagan, Bryan Coquard, Marc Sarreau, Giacomo Nizzolo, Nacer Bouhanni and Michael Matthews also took the start in Plaisir.

But the crosswinds blew strong on the early stages, meaning that our 'big four' only took two top ten placings between them, with Ackermann second on stage 2. Nizzolo won there, delivering another big win for NTT Pro Cycling after his Tour Down Under triumph.

That sprint was pretty much a two-man contest though, with those two men clearly the fastest from a ten-man lead group which emerged from the chaos of the winds.

Stage 5 was another opportunity, but with the peloton charging to catch Jan Tratnik just metres from the line, it was hardly a well-organised run-in as Niccolò Bonifazio (Total Direct Énergie) surged to victory.

All in all, Paris-Nice was a tough week for the fastmen.

A fitting sendoff to the spring season

If Paris-Nice really was the finale to an abbreviated spring campaign, and all signs are pointing towards that being a very real possibility, then it was a top-quality edition from start to finish.

The opening two stages across the plains of mid-France were breathless and action-filled, with the wind battering the peloton throughout throwing up tense and interesting racing. Ultimately, the winner on day one would hold on to yellow all week, but the fact didn't detract from the racing at all – Schachmann really had to fight for it to the end.

Stage 4's time trial provided intrigue as Danes Kragh Andersen and Kasper Asgreen (Deceuninck-QuickStep) both put in top rides before Schachmann split them, while the following day's action went down to the wire as Tratnik's bid for breakaway glory was cruelly swiped away from him at the death.

By stages 5 and 6, the escalating coronavirus situation and worldwide cancellation of countless sporting events made the decision to keep going look irresponsible. The Italian riders association called for it to be stopped, and two WorldTour teams pulled out in addition to the seven which didn't take the start.

But still, the race continued, and continued to entertain with the punchy stage 6 playing host to Benoot's canny victory as Schachmann struggled to stay in touch – and upright. Finally, there was Quintana's sublime stage 7 victory, and Schachmann's valiant battle to hang in there with Higuita, Benoot, Vincenzo Nibali and Thibaut Pinot on the final day's summit finish.

The German went through hell to do it, he said afterwards, "but now it's like being in heaven. Every little bit of pain in my legs was worth it."

The empty racing calendar facing us now is a miserable sight, but the 2020 Paris-Nice had something for everyone – it was at least a great note for the spring season to end on.