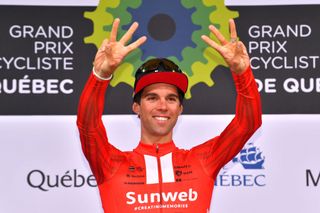 Michael Matthews on the top step of the podium at the GP Quebec last year (Image credit: Getty Images Sport)

This interview took place before any races were cancelled due to the Covid-19 coronavirus outbreak.

Michael Matthews is set to make his season debut on Sunday, heading to Plaisir, west of Paris, for the start of Paris-Nice. It's an unplanned outing for the Australian, who was due to take part Strade Bianche for the first time on Saturday.

Both Matthews and his new Sunweb teammate Tiesj Benoot would've made their season debuts in Tuscany, before the coronavirus outbreak forced organisers RCS Sport to call off the race, as well as Tirreno-Adriatico, Milan-San Remo and the Tour of Sicily. The team were then forced to re-route their stars, joining a number of others who did the same.

"There has been a discussion about a plan B because I need to race," Matthews told Cyclingnews. "Missing the Italian races would mean going back to Belgium with all guys, who will already have 10 or so race days, and then things will be pretty difficult for me."

Paris-Nice is as-yet unaffected by the virus, though Île-de-France, which hosts the start, reported 89 cases as of Friday night. Auvergne-Rhône-Alpes and Provence-Alpes-Côte d'Azur, where the final four stages will be held, reported 75 and 26, respectively.

Matthews has a good history at Paris-Nice, which often features numerous stages suited to his abilities as a sprinter/Classics rider who can handle the hills. In six past participations – his last in 2019 ending with a crash on stage 1 – he has three stage wins and two points classification victories.

The Australian could make a flying start again on Sunday, where a paved climb in Neauphle-le-Châteaux 5km from the finish could makes things difficult for the pure sprinters. In any case, he's in good form, even if it's not the race he'd planned for originally.

"I know my training shape is good, but it's different when you get into a race situation. I'm confident that I've had a good off-season and we'll have to see how it goes," he said.

"I like a long build-up to the season," Matthews added, referring to his habit of starting his seasons later than many of his colleagues. "I think it just gives me time to get in top shape for my first race and a bit more of a relaxed build-up.

"If you really want to prepare for the Classics, I think it's not the best to go to Australia and do those races. In the end, for me, from what I've worked out from my season, it's best to have that start a bit later."

Matthews spent several weeks of February in South Africa on a solo training camp, having been with the team in Calpe, Spain for training camps in December and January. The trip allowed him to explore what he enjoys about cycling, rather than focussing on watts and kilometres, he said.

"Everything is going really well. I was there for three weeks, and I think that going back to what I did in 2017 can hopefully get us back to winning ways like we did then.

"I got some braids in my hair, so that was pretty fun. I was just trying to do some different things to have fun with the sport and enjoy myself, enjoy the journey. I really like to enjoy some other things around bike riding to stay happy. I think that's how I arrive my best, when I'm happy.

"It was just me. Nicolas Roche came for 10 days. I think the other Classics guys did some racing, while Søren [Kragh Andersen] and Tiesj went to Tenerife. We had a lot of camps through the winter, so we had a lot of time to bond. It's been a good mix."

Matthews and Benoot: a double threat

Matthews has often been Sunweb's sole leader through the spring but this year will have Tiesj Benoot alongside him during the cobbled Classics and Ardennes Classics.

The Belgian is a new arrival after spending the first four years of his career at Lotto Soudal. His signing, on a two-year deal, meant that the pairing instantly elevated the team to among the top contenders for the spring, on paper at least.

Benoot's pedigree includes a win at Strade Bianche plus podium finishes at Brabantse Pijl, Omloop Het Nieuwsblad and the Tour of Flanders. Matthews, who has focussed on the Ardennes triple for much of his career so far, counts top five placings at each race among his palmarès.

"I obviously know him from the peloton during the last few years, but I think it's different when you're in the same team. You get to know each other much better and you're not battling against each other in the race."

Matthews added that having Benoot on the squad adds an extra option for race finales. The leadership pairing – a sprinter and an all-rounder – allows the team more tactical flexibility than they may have had in past years.

There's also the experience that Benoot brings. Despite only being 25, he was born in Gent and thus grew up riding the roads of Flanders. That knowledge can only help the team and Matthews, who has raced Gent-Wevelgem three times, and the Tour of Flanders, Dwars door Vlaanderen, and E3 BinckBank Classic once.

"It'll be really interesting to see how it all works out," Matthews said. "It can only be a positive thing at the moment, having more options in the finale. For the last few years I was maybe a little bit isolated in the finales, so having Tiesj here in the team will help.

"Also, with his local knowledge of all the roads – I think he knows every single road in the Flemish area like the back of his hand. That can definitely help all of us that are not from the region to get a bit more knowledge about the Classics."

Dreams of Limburg and Flanders

Benoot aside, Matthews believes that the whole Sunweb Classics unit is stronger than it has ever been since he joined from Orica-GreenEdge in 2017.

Other new additions for 2020 include German strongmen Jasha Sütterlin and Nico Denz, from Movistar and AG2R La Mondiale, respectively. 2017 Paris-Roubaix Espoirs winner Nils Eekhoff makes the step up from the development squad, too.

"I think we have the strongest team for the Classics that we've had since I joined. You'll see the team focus a bit more on the Classics and sprinting for the next few years, rather than a GC team like when Tom [Dumoulin] was here," Matthews said.

"We've hired some really good guys like Jasha Sütterlin and Nico Denz. They're also really good Classics riders, really strong guys in those areas. I think that now we have a really good all-round team to really fight for those victories in the Classics."

This year, Matthews will ride a fuller Classics schedule than he has in the past, taking in Driedaagse De Panne, E3, Gent-Wevelgem, the Tour of Flanders, Brabantse Pijl, Amstel Gold Race and La Flèche Wallonne.

Liège-Bastogne-Liège, where he finished fourth in 2017, is also a possibility, he added. Paris-Roubaix is definitely off the cards, though he did say that he'd "like to tick the Roubaix box" before the end of his career.

But the one he craves the most – Amstel Gold Race, where he was third in 2015 – comes with an added incentive.

"I think that there's a couple that mean more to me than just bike races," Matthews said. "Amstel Gold is where I had my first date with my now-wife, so that's obviously a massive one for me, more than just a bike race – a more personal reason.

"I'm totally obsessed with Flanders, so I think that's another nice one I'd like to do really well in and hopefully be on the podium one of these years. Those two are my biggest ones that I really dream about, I guess."

This spring will see Matthews take on Flanders for only the second time in his career, having focussed largely on the Ardennes during his time at GreenEdge. He made his debut last year, taking sixth place in the chase group behind solo winner Alberto Bettiol.

"Last year we threw it in to see how it went. It turned out alright," he said modestly. "So, we'll try it again."

We'll find out during the upcoming week whether Matthews can repeat the winning start he enjoyed in 2015 and 2016. With one false start to his season already in the books, he'll be hoping to avoid another one in the Race to the Sun.