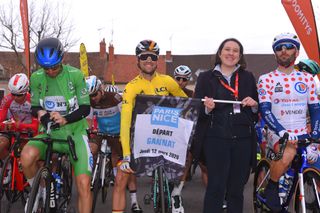 Paris-Nice will continue until Saturday but then end a day earlier than scheduled, to help the fight against the possible spread of the coronavirus, race organiser ASO announced.

The final 113km stage was due to start and finish in Nice after a loop into the hills. However ASO said that the race will end after stage 7 from Nice up to the mountain finish in Valdeblore-La Colmiane.

"After consultation with the relevant authorities, the Union Cycliste Internationale and the Ville de Nice, the organisers of Paris-Nice have decided that 7th stage, finishing at Valdebore la Colmiane, will be the last of the race," ASO announced.

"This decision, taken as part of the fight against the spread of the Coronavirus, means that the final stage in Nice is now cancelled."

Most riders and teams lined up for stage 6 on Friday. However the Bahrain-McLaren team did not start due to the growing concerns about the spread of the coronavirus Covid-19 in France.

A member of staff at Bora-Hansgrohe was taken to hospital by an ambulance late on Thursday evening but was later released, with French doctors believing his symptoms did not indicate the person had the coronavirus.

The German team said the staff member has been isolated as a precautionary step, and to continue actively monitoring the situation in order ensure maximum safety for all concerned."

"The decision has been taken to repatriate all team personnel to their homes as soon as possible. Rolling restrictions on movement across Europe and the health of the entire team mean this precautionary measure is an immediate priority," Bahrain McLaren said.

Bahrain-McLaren's decision comes after a tense night of talks between teams, riders and organizers.

According to Het Nieuwsblad, the CPA riders association expressed their concerns about continuing to race and the problems of riders and team staff returning home. 11 teams apparently voted to continue, five voted against but it is not clear if they will race on. A compromised was eventually reached, with a decision to conclude the race Saturday, avoiding Sunday's final stage around Nice.

Marc Madiot, the team manager of Groupama-FDJ squad and head of the French Cycling Pro League said: "I think it's good to continue. Let's not panic. The President didn't say that everything had to be stopped and if the [local government] prefects tell us that we can continue, I don't see why we should stop. That said, if one of my riders tells me that he wants to go home, I won't object."

However riders are concerned and frustrated about Paris-Nice continuing.  According to local French newspaper Sud Ouest, a rider who did not want to be identified, said: "Personally, I'm always happy to race but recognize that common sense means it might not be right, as a sense of responsibility.  All other sports have stopped, we'll look like idiots if we continue."