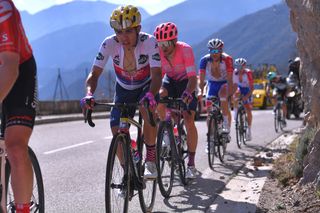 Sergio Higuita (EF Pro Cycling) may not have come away from Paris-Nice with the overall victory he was hoping for, but third place, the young rider's white jersey and some impressive displays in the crosswinds meant it was another good week of racing for the 22-year-old.

Ably assisted by teammates Sep Vanmarcke and Tom Scully, Higuita made the right splits as the winds struck stages 1 and 2, impressing for a rider who weighs sub-60kg as others floundered.

Higuita didn't manage to put time into his podium competitors on his favoured terrain on the final stage summit finish of Valdeblore La Colmiane, but still, the week was only a positive experience for him, in a number of ways.

"It's a beautiful race that I think went really well," Higuita said in an EF press release. "The first few stages with Sep, Tom and Alberto Bettiol, who are Classics guys – they gave me amazing support helping me move through the peloton a lot easier

"These really were difficult stages for me. I'm not a big rider and to be around those guys and learn from them was great. They were stages where we could have lost a lot of time and we didn't."

The Colombian added that the stage 4 time trial in Saint-Amand-Montrond was a learning experience too. The stage was only his second time trial with the team after the Vuelta last year. He ended up 24th and fifth overall after the test, but moved up to the podium after riding strongly on the punchy stage 6 to Apt.

"I also learnt from the time trial day about how to better prepare myself," he said. "Then, the last couple of stages have been hard, especially stage 6. It was a day of big battles between us, like stage 7 as well.

"In the end, I just felt like I didn't quite have it in me to make the move in the final kilometres, but I'm happy we made the podium. In general though, it's been a good start to the season for me from the National Championships through to today."

Higuita's podium place in France can be added to that National Championships road race win in Tunja, where he finished 1:15 up on Tour de France winner Egan Bernal, and overall victory at the Tour Colombia 2.1 as EF swept the podium. All in all, it's been a great start to his sophomore year.

Unlike the majority of other riders, Higuita's upcoming plans have not yet been derailed by the Covid-19 coronavirus pandemic, though the outlook for his next races, Itzulia Basque Country and the Ardennes Classics, doesn't look positive. For now, though, it's time to rest after his flying start.

"Now I'm scheduled to rest, which was always my plan to take some time out after this race. So now I'll head home to Colombia because it's been full gas since January and I'm starting to feel that amount of intense workload of the past few months.

"Especially since Tour Colombia 2.1 I've been training heavily because I knew that this race was going to be a great opportunity for me. So now it's about resting for a bit before getting back to training, and hoping that everything sorts itself out and we find a solution quickly with the virus so everyone can get back to racing again soon."

Yes! Sergio Higuita, AKA the HiguitaMonster, earned the best young rider win and third overall in his first Paris-Nice. But it takes a village — what a week of racing with tons of help from incredible teammates. #teamworkmakesthedreamwork pic.twitter.com/pz7VI1CHOVMarch 14, 2020