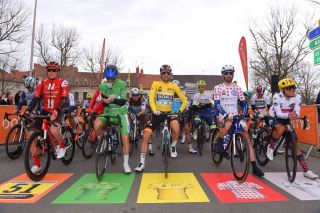 The Associazione Corridori Ciclisti Professionisti Italiani – the Italian Professional Riders Association – have called on Paris-Nice to be stopped to safeguard the riders and team staff at the French race, and to reduce the risk of the coronavirus spreading due to contact with the public at the French race.

"We hope that after today's stage, Paris-Nice is stopped. We're working so that the riders and team staff who are away from their families can return home as soon as possible," ACCPI president Cristian Salvato said.

"Italy has been in lockdown for several days and we're extremely worried about men and women racing internationally. Cycling is an international sport that involves people from all over the world. In this difficult moment in history, things have to stop, there's no other solution."

On Wednesday at Paris-Nice, Christian Prudhomme insisted the race would go ahead and reach Nice at the weekend. However, French President Emmanuel Macron is due to make a national televised address on Thursday evening and could introduce new measures that stop all sport and public gatherings.

The Covid-19 pandemic has already seen the suspension of sporting activity in Italy, where the entire country was placed in quarantine earlier this week. Milan-San Remo has been postponed for the first time since 1945, while Tirreno-Adriatico, Strade Bianche, the Trofeo Binda and the Giro di Sicilia have also been postponed. UCI president David Lappartient acknowledged that the Giro d’Italia, which gets underway on May 9, is at risk.

Gent-Wevelgem men's and women's races and the E3 BinckBank Classic are among the races that are facing cancellation in Belgium after the Flemish regional government prohibited all sporting events up to and including March 31. Races in the Netherlands and Spain have also been suspended until at least the end of the month, including the Volta a Catalunya WorldTour race.

"Geographical borders can't stop the virus. To fight it we've got all stop until new information confirms we can race safely," Salvato said.

"We're part of the CPA rider's association and so we've asked Gianni Bugno to ask the UCI to stop all racing to protect the riders and anyone who they could come into contact with during the races and the travelling during this critical moment for everyone's health."