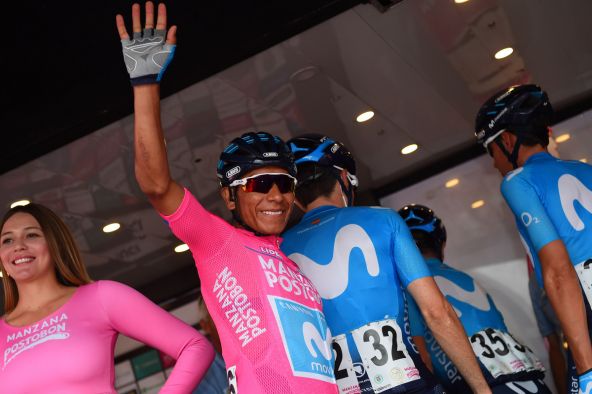 Things got off to the best possible start for Quintana with a stage and the overall of the Tour de San Luis, which he followed with second place behind Alberto Contador at Tirreno-Adriatico.

Then came the biggest moment in the young Colombian’s career so far: a maiden Grand Tour title at the Giro d’Italia. Having suffered from illness before the race, he came into his own in a final week that was backloaded with mountains. He took the lead on stage 16, which featured a descent of the Stelvio shrouded in fog and controversy, and drove home his advantage on the mountain time trial up Monte Grappa.

He was in the leader’s jersey at the Vuelta a Espana, too, and a three-way tussle with Alberto Contador and Chris Froome was on the cards until a crash on stage 10’s time trial dumped him out of the race with a fractured collarbone.

Quintana’s breakthrough year saw him finish runner-up in the Tour de France behind Chris Froome. He went on the attack at every opportunity in the mountains, notably going toe-to-toe with Froome up Mont Ventoux before winning stage 20 atop the Semnoz to seal second place, the white and polka-dot jerseys. Overall wins in the Veulta a Pais Vasco and the Vuelta a Burgos confirmed his status as one of the brightest emerging stars in stage racing.

Quintana joined Movistar for his first season at World Tour level. He won the Vuelta a Murcia and the Route du Sud, but most memorable was the stage win at the Criterium du Dauphine. With Team Sky and Bradley Wiggins controlling a peloton that also included Cadel Evans, Quintana attacked on the Col de Joux Plane and stayed clear to Morzine.

Feature Quintana, Higuita and Team Sunweb among the talking points from a week of racing in France

News Ledanois: The race is far from over

Report Colombian solos in ahead of Clarke, Calmejane, Pinot