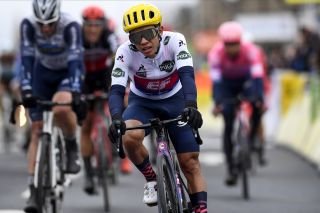 Three days in and racing at Paris-Nice has been anything but predictable with crosswinds, crashes, and chaos ruling over proceedings.

The race has seen three different stage winners and a sequence of twists and turns that have kept viewers gripped on the edge of their seats, but one constant feature has been the sight of EF Pro Cycling's Sep Vanmarcke – often with his head turned at an almost 180-degree angle leading his pint-sized teammate Sergio Higuita through a sea of anarchy as the peloton gasps for air and the next set of echelons forms.

The sight of the six-foot-something Classics specialist blazing a path for his tiny Colombian teammate is as transfixing as one of Alphilippe’s Hail Mary, but what makes the Vanmarcke-Higuita tandem stand out is that on the face of it, it shouldn't work. A seasoned Classics rider and an inexperienced featherweight don’t typically belong together.

Vanmarcke on coronavirus: It's a bad situation

Yet every time it looks as though the elastic is about to snap or when Higuita finds himself slipping through cracks that even water can't reach, the Colombian finds his way back to teammates' wheel. Time after time, echelon after echelon, they are almost inseparable. And it's no coincidence that as the race heads into the decisive time trial Higuita sits fourth overall and just over twenty seconds down on the yellow jersey.

"I think I’ve surprised my teammates with how I’ve been riding," Higuita modestly said on Tuesday evening.

"They seem impressed because sometimes riding with climbers in these situations who weigh so much less can be hard for them, so when I see them fighting it gives me more motivation to fight, too, especially when you see them taking the risk to help protect you.”

Of course, it’s not just Vanmarcke who has helped to keep the EF Pro Cycling leader safe in the peloton. The entire team has rallied around their climbing sensation and half the job in protecting Higuita starts well before the cameras are even switched on.

However, it’s still the Classics core of Vanmarcke, Tom Scully and Alberto Bettiol that shoulder most of the responsibility when the wind changes direction and the hammer drops. On stage 1 the team was briefly caught out by a dangerous split and were forced to burn several matches before bringing Higuita back into contention but since then the American squad has been front and center at nearly every turn. For Vanmarcke that comes down to experience, but also trust.

“First of all he needs to follow me and trust me,” the Belgian said after stage 3.

“He does that really well. He trusts that I know what to do and when to do it but when it’s full gas it’s more yelling than talking to him, but of course, I look back a lot. My dad says I’m going to crash if I keep looking back but Sergio is our leader and I need to know if he’s still there, because if he loses the wheel then I need to wait.

“Of course, there are times when I need to wait but that’s just because it’s chaos but he still does a great job by following. Sometimes I get through a gap and I need to wait. I look back the whole time but I also try and create space for him by making myself bigger and swinging a bit.

“They’re small tactics but it gives him a bigger gap to come through. We raced Lombardia I think but this is the first time that I’ve worked with him. It’s going well. It’s important that he trusts his teammates because then you feel confident. That takes you further.”

Higuita deserves credit too. Clearly in form after winning the Colombian road title – and with it arguably the best national kit in the peloton – the 22-year-old has used his track background to help traverse the tightropes that are the small wind-swept roads of rural France.

When gaps open up he blends a natural acceleration with a dogged mentality, and one can often see his rivals give double takes as a rider with a frame half their size cuts through groups with seeming ease. In all honestly who would even have the heart to put him in the ditch in the first place?

“Thankfully I’ve gained experience from racing on the track which has meant learning how to race really close to people and learning to be agile amongst them,” Higuita says.

“You have to be good at finding space and winning those spaces which is what I’ve been having to do the last few days, so I’ve just been putting into practice what I learned from that time on the track racing with the sprinters.

“From racing on the track I learned how to accelerate and show mobility, moving and fighting for space and looking for those gaps. You have to keep your wits about you when you’re in the bunch and you’re up against people who weigh 85kg or more. They can easily make you crash, so you have to learn how to fight in amongst the bunch without crashing.”

But it’s the burgeoning relationship between Higuita and Vanmarcke that impresses more than any individual flair. Like food combinations that shouldn’t work but somehow provide flavous and sensations you’d never think possible, these two riders have pulled off something quite special at Paris-Nice, and provided a welcome tonic to a sport that has been dominated by unsettling news and developments in recent weeks.

“The last two days the whole peloton has come and talked to me about him because they’re also really impressed,” Vanmarcke says.

“They talk about how good he follows and how he fights. He’s glued to my ass and it must be funny to watch, to see a big guy like me with a tiny person like him but he does his part perfectly. He’s not losing any time and that’s not easy. At the start of the race, there were maybe twenty or thirty climbers here with GC aims, maybe more, and until now it’s only really Schachmann and Nibali, together with Sergio who haven’t lost time. It’s great the way he’s raced the last three days.”

In all likelihood, Higuita will ship time on Wednesday’s TT course. After that, the race heads towards more mountainous terrain on which the EF climber can show another weapon in his armory. At that point, Vanmarcke will be forced to yield as specialist climbers position themselves around the Colombian, but next time the crosswinds flare up and Higuita needs assistance you can count on this new double act to shine once more. For now, though, Vanmarcke can at least take a breather and rest. As Higuita acknowledges the Belgian certainly deserves it.

“I think he must have a bad neck from me following him the whole day and being on his wheel and him constantly looking round to check I’m there. When you race with people like that it gives you motivation to really fight and ride with them when you feel that protection from them and that they trust you. You then feel like you want to ride and perform well and make them proud of you.”