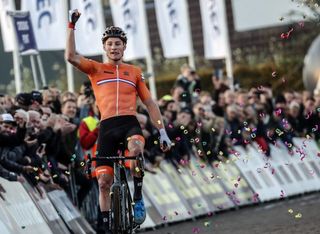 The various top-level cyclo-cross series – the World Cup, the Superprestige and the DVV Trofee – all take a break this weekend as Europe's top riders line up for the 2019 UEC Cyclo-cross European Championships in Silvelle di Trebaseleghe, near Venice, Italy, on Sunday.

Pidcock eager to test himself against Van der Poel, Iserbyt at European Championships

With various Masters titles being decided on Saturday, the next day is then the big day, with all the junior, under-23 and elite races for men and women taking place.

Elite and under-23 women

The Netherlands' Ceylin del Carmen Alvarado lines up as the defending under-23 champion, and is again the favourite to take the title in what will be her final year in the category before moving up to the elite women.

Not that she should be too worried, having already topped the world's best elite riders at two Superprestige rounds this season, in Gieten and Ruddervoorde, putting her back into the overall series lead heading into the European Championships.

The 21-year-old can expect to be pushed hard by her own teammates Inge van der Heijden – second last year – and Manon Bakker in what could easily be a clean sweep for the Dutch on the podium, although Italy's Sara Casasola will be looking to put on a good showing in front of her home crowd.

The elite women's race was also dominated by the Dutch on home ground in 's-Hertogenbosch in 2018, where Annemarie Worst topped the podium after escaping on the penultimate lap and only just holding off a fast-finishing Marianne Vos and Denise Betsema.

Belgium's Sanne Cant took fourth, but would go on to take her third World Championship title in as many years at the start of 2019. Providing she's recovered fully from the back injury she sustained when warming up for the third round of th Superprestige in Gavere two weeks ago – and second place in Ruddervoorde last weekend proved that she was well on the way – the 29-year-old is the most likely rider to upset Worst's hopes of a title defence, with no Vos set to line up this year.

Betsema, meanwhile, remains provisionally suspended after it was revealed in April that she had tested positive for an anabolic steroid at the Hoogerheide World Cup in January. The 26-year-old maintains her innocence.

Worst's Dutch teammate Yara Kastelijn should also not be underestimated, having made the step up to elite level this season, and having already won the Gavere round of the Superprestige a few weeks ago.

Elite and under-23 men

Mathieu van der Poel wasted no time in showing his rivals who was boss when he returned to cyclo-cross for the first time this winter at last weekend's fourth round of the Superprestige in Ruddervoorde, where he beat Belgian pair Laurens Sweeck and Toon Aerts.

The 24-year-old Dutchman has said that his only goal this 'cross season is to win the World Championships in Dübendorf, Switerland, before he knuckles down for another increasingly busy season on the road, but he may not be able to stop himself pushing for a what would be a third senior European title in as many years.

Van der Poel got the better of Belgium's Wout van Aert by just 14 seconds to win last year's European Championships, but with Van Aert still recovering from the injuries he sustained during his crash in the time trial on stage 13 of the Tour de France, it'll be up to the likes of Van Aert's compatriot and 2018 bronze medallist Sweeck, current World Cup leader Eli Iserbyt – also of Belgium – and Great Britain's Tom Pidcock to try to stop the overwhelming favourite.

Pidcock is the reigning under-23 European and world champion, but has made the decision to race solely at elite level this 2019/20 season, and very successfully, too, so far, with his third and fourth places in the Superprestige rounds in Boom and Gavere, and second place to Iserbyt at the Koppenbergcross in the opening round of the DVV Trofee.

With 22-year-old Iserbyt also making the same decision to step up, and having already this year won the first three rounds of the World Cup, it leaves the best of the rest from last year – bronze medallist Antoine Benoist of France and Pidcock's British compatriots Ben Turner and Thomas Mein – the riders most likely among those fighting it out for this year's U23 title.