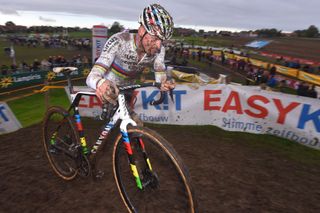 Mathieu van der Poel (Corendon-Circus) enjoyed a winning return to cyclo-cross at Sunday's Superprestige round in Ruddervoorde and immediately confirmed he will target a winter of cyclo-cross success before focusing on road racing in the spring, mountain biking in the summer, and then a possible Grand Tour debut at the 2020 Vuelta a España.

Having missed the opening three rounds of both the Superprestige and UCI World Cup, as well as Friday's DVV Trofee opener, Koppenbergcross, the 24-year-old Dutch rider is not looking to add to his seven overall victories across those series, instead focusing on individual titles.

"The World Championships is my only goal," Van der Poel told Het Nieuwsblad after taking victory on Sunday. "And the European Championships next Sunday, of course."

Van der Poel's attempt to retain the rainbow stripes will come in the Swiss town of Dübendorf in early February, with his cyclo-cross season geared around taking victory there. But with months to go until then, the focus now is on getting up to speed – even if he's already winning.

That means racing as much as possible in the interim, even forgoing his usual Spain training camp in December to do so.

"I have to make up for something," he said of the racing he's missed so far. "Because I started so late, I want to ride as many races as possible. I'm not going on a training camp in December either. I will race everything, even during the Christmas period.

"My only training camp will be after the National Championships [in mid-January]. I can do it a bit longer than usual, because I can miss the World Cup in Nommay [January 19]. Will I scrap my father's race in Hoogerheide as well? That's possible. It's a week before the Worlds, so it has to work."

Corendon-Circus team boss Christophe Roodhoft confirmed his star rider's plans in an interview with Dutch broadcaster NOS, adding that a come-from-behind victory in the DVV Trofee, which still has seven of eight races left to run, could still be a possibility.

"He is going to try to win other races, but the intention is that we take him as economically as possible to the World Championships," Roodhoft said. "We've already given up on the rankings a bit, except for the DVV Trofee. That will take the pressure off him a bit, because it has to be fun too.

"With Mathieu, we opt for a slow build towards the cyclo-cross World Championships. In winter, the Worlds are his biggest, and only, goal."