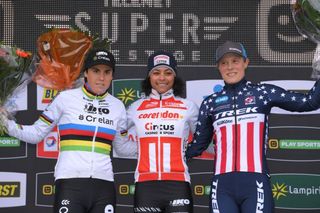 Sanne Cant, Ceylin del Carmen Alvarado and Katie Compton on the podium after round 4 of the 2019 Superprestige series in Ruddervoorde, Belgium (Image credit: Getty Images)

While everyone was quite rightly talking about Mathieu van der Poel's winning return to cyclo-cross at round 4 of the Superprestige series in Ruddervoorde, Belgium, on Sunday, the Dutchman's Corendon-Circus teammate Ceylin del Carmen Alvarado won the women's event and returned to the top of the overall standings, while Toon Aerts and Laurens Sweeck now sit on equal points at the top of the men's classification.

On what was a highly successful day for both the men's and women's arms of Corendon-Circus, Alvarado's victory put her back at the top of the standings after the 21-year-old had won the opening round of the competition in Gieten. It also bodes well for her attempt to defend her under-23 title at the coming weekend's Cyclo-cross European Championships.

World champion Sanne Cant's (IKO-Crelan) second place, 19 seconds down, meanwhile, was impressive for the fact that the Belgian had been forced to miss Friday's Koppenbergcross with a back injury sustained in the warm-up for the previous weekend's Superprestige round in Gavere, and had been looking unlikely to take part in Sunday's race, either.

It now lifts Cant back up to third place overall, 10 points behind Alvarado, with 777's Yara Kastelijn losing her lead to her Dutch compatriot to now sit second, three points off the pace.

Van der Poel's victory in the men's competition was far from unexpected, but impressive rides by Laurens Sweeck (Pauwels Sauzen-Bingoal) and Telenet Baloise Lions' Toon Aerts for second and third place puts both riders at the top of the men's standings with 45 points apiece at the half-way mark of the eight-round competition, with Aerts' teammates Corne Van Kessel and Quinten Hermans also on equal points just two points behind them.

Friday's DVV Trofee series opener, the Koppenbergcross, meanwhile, saw Kastelijn beat her 777 teammates Annemarie Worst and Alice Maria Arzuffi to win the women's race, and Eli Iserbyt (Pauwels Sauzen-Bingoal) get the better of Trinity Racing's Tom Pidcock in the men's event after a ding-dong battle on the course that takes in the climb of the famous cobbled Koppenberg climb.

It means that 22-year-old Iserbyt now leads the DVV and the overall World Cup standings, and is just four points off the pace in sixth place in the Superprestige, having finished fifth in Ruddervoorde on Sunday.

Next up – on November 10 – is the UEC Cyclo-cross European Championships in Silvelle, Italy, with the other major 'cross competitions on hold until the following weekend, with the World Cup recommencing with round 4 in Tabor, in the Czech Republic, on November 16, followed by the second round of the DVV Trofee the next day, on November 17, while the fifth round of the Superprestige, in Zonhoven, Belgium, doesn't take place until December 8.