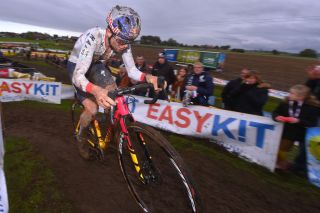 British Cycling has announced the Great Britain line-up for the UEC Cyclo-cross European Championships next weekend, with Tom Pidcock leading the charge in his first year at elite level.

The reigning U23 world champion has made the step up this season, opting to ride much of his calendar with the pros. The November 10 race will be his first participation at a major championships at elite level.

Pidcock's Trinity Racing teammate, Cameron Mason, is among four men who will compete in the U23 men's race. Mason will be joined by Ben Tulett, reigning junior world champion, who makes the step up a level this season.

Pidcock eager to test himself against Van der Poel, Iserbyt at European Championships

"The team we are taking to the European championships this year is hugely competitive, and we can expect to see them all challenging for the podium in their respective races," Great Britain Cycling Team cyclo-cross co-ordinator Matt Ellis said in a statement released by British Cycling.

"For the junior women in particular, this race is a big deal for them as it's the first year they have their own separate category, so they are all excited for the race. In the junior men's category, all four riders have done well on the domestic scene so far this season, so it'll be good to see where they are at against international competition when they race in Italy.

"Anna Kay comes to the European Championships carrying good form having finished in third place in the elite women's race at the Bern round of the world cup series, so she should put in a strong performance in the under-23 field. Similarly, Ben Turner and Thomas Mein have been showing really good form in their races this season so far, so it'll be good to see what they can do out in Italy."

Pidcock is undoubtedly the star rider, and can head to Silvelle, Italy, with hopes of a medal placing. At the weekend he said that wins are the aim but that the 2019-20 season is all about getting used to racing at elite level, adding that: "My goal is to be on the podium, and I would be happy with that."

"It's great to see Tom stepping up into the elite men's category," Ellis said. "He was physically very strong coming into the season, thanks to a successful season on the road where he won bronze in the world championships amongst other achievements, and technically he's improving race by race.

"He's already showing he's in the mix for a medal at this level, and I'm really looking forward to seeing him get stuck in at the European championships."