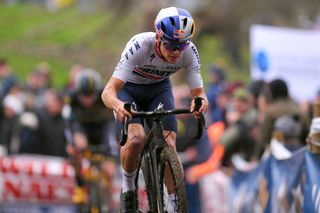 Although he is still young enough to defend his title in the under-23 race, Tom Pidcock (Great Britain) will take on Mathieu van der Poel (Netherlands) and Eli Iserbyt (Belgium) in the elite men’s race at the UEC Cyclo-cross European Championships in Silvelle di Trebaseleghe, Italy next weekend.

“I have achieved everything I wanted in the U23 ranks and I am looking forward to testing myself in the Elites,” said Pidcock in a statement released by the race organisation. “I have never ridden the Silvelle course, but from what I can see it looks nice as the course features a bit of everything. It is difficult to say who is the favourite, it depends on how Van der Poel is going when he returns. Iserbyt is in really good form at the moment and has been nearly unbeatable so far. They are definitely the guys to watch.”

Pidcock has already won European titles at both junior and under-23 level, though he downplayed the prospect of completing the set next Sunday.

“With the elites it might be a little early,” Pidcock said. “I’m always looking to win but this season for me is about getting used to the elite level. My goal is to be on the podium and I would be happy with that.”

Van der Poel makes his first cyclo-cross appearance of the season at Sunday's Superprestige race at Ruddervoorde, having opted to skip Friday’s Koppenbergcross, deeming it to be too demanding as an opening race. Iserbyt soloed to victory at the Koppenbergcross, beating Pidcock into second place by 28 seconds, with Michael Vanthourenhout almost another minute back in third.

Speaking last month, Pidcock said that he had taken heart ahead of his first full winter of elite competition from his contemporary Iserbyt’s displays thus far at the top level. Pidcock defeated Iserbyt to win the under-23 world title in 2019 after the Belgian had won the rainbow jersey 12 months previously.

“I think it’s good to keep the engine warm in winter time. It goes a bit against the traditional way of cycling but our sport has changed a lot,” Pidcock said. “I think what is new is that riders are allowed to race multiple disciplines properly now, whereas in the past they might have been forbidden. My motivations are always very high, I love racing and competing. I would get bored if I couldn’t race in winter.”