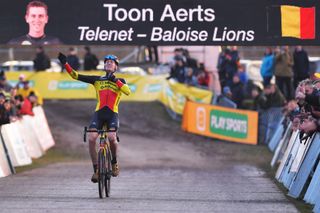 Aerts denied Van der Poel his 36th consecutive cyclo-cross victory. Van der Poel's winning streak began at the Koppenbergcross in 2018, according to a report in Wielerflits.

The world champion had just returned to cyclo-cross racing in Ronse after spending a week training in Spain.

Aerts distanced himself from the front group in the opening laps. He built a lead of 30 seconds over chasers van der Poel and Iserbyt by the start of the fifth lap.

Showing top form and technical skill through the mud, Aerts' lead grew to over a minute as he entered the final lap.

Iserbyt managed to catch and pass van der Poel to finish in second place, while the world champion appeared to struggle to finish in third at over two minutes back.

Iserbyt remains in the lead of the DVV Verzekeringen Trofee series at 1:45 ahead of Aerts. Van der Poel is currently in first place in the UCI rankings.